Back in December of 2018, we let you know that a concept based off of Skate Kitchen was up for development at HBO. We were even able to tell you that the series was from the originator of the source material and filmed on the streets of NYC. That series is about to come to HBO with a whole new name – BETTY. 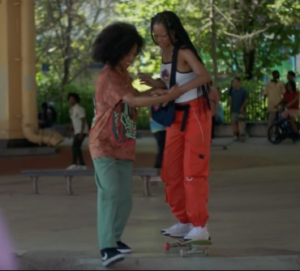 is not much new to tell but we repeat it here to aid you in becoming aware and perhaps excited for the upcoming debut. The series follows a diverse group of young women navigating their lives through the predominantly male-oriented world of skateboarding. Opinionated and loyal, Janay (Lovelace) is strong-willed and stubborn in ways that both help and hurt her. Honeybear (Moonbear) is a quiet storm. Her flagrant style is a ruse; an armor she wears to hide her emotional struggles. Kirt (Moran) is a lover (to the ladies), a fighter (to the rest of the world), and a little kid in the body of a woman. She’s the funniest person alive, but even if she knew it, she wouldn’t care. Meanwhile, Indigo (Russell) is a street-savvy hustler trapped in the body of a well-to-do art school drop-out. On the edge of the group is Camille (Vinberg), guarded, perceptive, intelligent and awkward. She wants to be down with the dudes in the skate park and has fought hard for the small space she’s carved out with them, but she needs to realize that cool points don’t actually add up to the sum of anything, especially in the eyes of the other girls. Recurring cast includes Reza Nader as Farouk, Edmund Donovan as Bambi, Caleb Eberhardt as Donald, Katerina Tannenbaum as Ash, Jules Lorenzo as Yvette and Brenn Lorenzo as Celia.

Here is a Tease as we get our first look at the series.

Hey, just the straight dope here, in case you didn’t know if you are a skateboardin’ gal of the ‘hood you are known as a ‘Betty’! Are you game for an inner-city GIRLS?