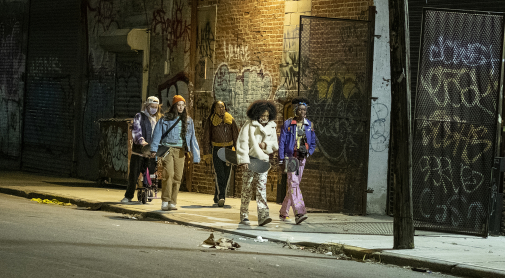 There are two sets of stories played out in BETTY. One is the overarching plot of the combined efforts of the Betties and the other is the various personal stories of each. Janay (Dede Lovelace) always seems to carry the Bettie’s story forward and does so again this episode. Her main drive is to find an indoor boarding space to overwinter in. Each year, when the weather turns cold the boarders, both the Boys & the Betties, need to find indoor space, large enough to host them all and any portable ramps & jumps the neighborhood may have accrued. She is out to find warehouse space ample for their needs but not break the wallet. The main player on the Boys effort is Sylvester (Andrew Darnell). The two are trying to make something happen and to hit it off with each other, but it is hard. That seems to be Janay’s MO with guys; she makes it so difficult, though there is chemistry between the two; and that is Janay’s personal journey. 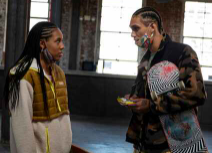 The other girls have their own things going also. The title refers to Honeybear’s story as this episode opens up with a 3-way between her, Ash, and the barista, Vanessa. Honeybear (Moonbear) is exploring life & sexuality to its fullest. You’ve got to watch the expressions on her face; you’ve got to because they say so much of what’s going on with her. One moment she feels jealous & left out when the others are making out, then when attention is on her she feels satisfied, but you can see that she wonders if all is okay and good with what she’s doing. However, the wattage of the smile on her face the day after is like bliss. But, when Ash (Katerina Tannenbaum) asks her if she wants to continue the 3-some she doesn’t sound so confident. To top it off she hits it off with a flirty guy on the ferry. Where Honeybear goes from here is anyone’s guess. 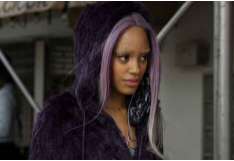 Indigo (Adjani Russell) is also in a quandary. She is out hustling to make a buck. It is not quite what you think. She isn’t prostituting but more of an escort dating sort of thing. Why? Not just to make a living it seems but to give her progressive mother a tough time. She is out to make a life on her own terms, not the terms set or hoped for by her mother. She really is adrift; out of all the Betties she is adrift the most because Kirt is just a stoner at play & Camille seems to be making it work. Kirt’s (Nina Moran) biggest contribution this week is to bond with her boys. Her best pals seem to be Charlie and company as she bestows advice to these losers as if she is a worldly sage. It is all part of her quest I guess, to be mentor and guru to these scruffy dudes. It is a fun moment in the episode, I give it that. As for Camille (Rachelle Vinberg) she seems to be working hard at making videos for the apparel company she linked up with. In the end though, despite her best efforts, they weren’t entirely satisfied; they need better and more. Can she keep up with it?

We shall see what happens to her and her colleagues. At least they are all happy for the moment as Indigo finds them a hot spot for the winter. It is a place of her Mom’s, we gather and Indigo might just be setting herself up for a world of hurt, but for now, the Betties find a moment of happiness.