HBO is putting quite a few projects into development lately. Only time will tell how many will get to the schedule and here is another one to keep our eye on. Though not titled the comedy series in question is based on a movie entitled Skate Kitchen. 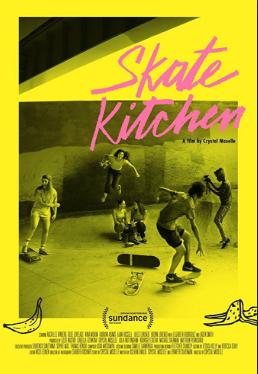 If you are unfamiliar with the Sundance entry Rotten Tomatoes fills us in on the source’s plot: Camille, an introverted teenage skateboarder (newcomer Rachelle Vinberg) from Long Island, meets and befriends an all-girl, New York City-based skateboarding crew called Skate Kitchen. She falls in with the in-crowd, has a falling-out with her mother, and falls for a mysterious skateboarder guy (Jaden Smith), but a relationship with him proves to be trickier to navigate than a kickflip. Writer/director Crystal Moselle immersed herself in the lives of the skater girls and worked closely with them, resulting in the film’s authenticity, which combines poetic, atmospheric filmmaking and hypnotic skating sequences. Skate Kitchen precisely captures the experience of women in male-dominated spaces and tells the story of a girl who learns the importance of camaraderie and self-discovery.

Moselle will pair up with friend Lesley Arfin (writer for GIRLS) to write and produce the series. Moselle is also expected to direct. The ladies stated, “As girls we were never brave enough to try skateboarding,” said Moselle and Arfin. “We’re excited to work on a project that could potentially get other girls to feel inspired enough to face their fears, fight the patriarchy and start shredding. Women are changing the game across industries all over this country. Why not add skateboarding to that list?”

The project will be filmed in the neighborhoods of New York City where skateboarders rule. Writer-director Moselle immersed herself in the life of skater girls, resulting in the film’s authenticity, combining poetic, atmospheric filmmaking and hypnotic skating sequences. Her movie captures the experience of women in male-dominated spaces and tells the story of a girl who learns the importance of camaraderie and self-discovery.

Hopefully, Moselle/Arfin will be able to recapture all of that enough for HBO to give it a greenlight. As always, we will keep you posted.