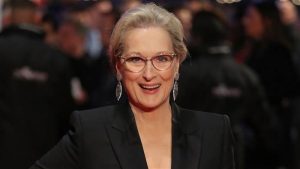 One thing missing from the announcement of the second season of BIG LITTLE LIES was just what plotline would it have. Well, with the news that Academy Award-winning actress Meryl Streep has come onboard we get a glimpse into a storyline. Accompanying the news comes a description of the character the author Liane Moriarty has created & David E. Kelley will script for Streep.

It states – Streep will play Mary Louise Wright, the mother of Perry (played by Alexander Skarsgard in Season One). Concerned for the well-being of her grandchildren following her son Perry’s death, Mary Louise arrives in Monterey searching for answers.

Surely, the themes and tone of the work will be intact in the sophomore season. Why mess with the award-winning formula? HBO reminds us – the subversive, darkly comedic drama will explore the malignancy of lies, the durability of friendships, the fragility of marriage and, of course, the vicious ferocity of sound parenting. Relationships will fray, loyalties will erode…the potential for emotional and bodily injury shall loom.

And now Meryl Streep will be added to the mix.Mary Louise Wright, I’m sure, will insist that lies were spread about her poor boy and that justice must be served. We await how she will tackle the ladies of Monterey, California, She is the first announced addition to the cast joining the assembled Nicole Kidman, Reese Witherspoon, Laura Dern and Shailene Woodley. Streep has been on HBO before in four different roles in ANGELS IN AMERICA. So, are you surprised or not that Streep wanted in on this Emmy and Golden Globe-winning ensemble?

We are sure more news regarding BIG LITTLE LIES will surface as the year goes on. However, nothing has been confirmed as of yet, but if they get hustling then we could see the series (no longer a limited series, in my book) by late 2018. That leaves plenty of time to catch up on Season One if you haven’t seen it yet; which means ignore the spoiler contained above.