And with that let’s say that this episode is yet another doozy adding to those themes. It is also full of flashbacks – Perry and Celeste first dating; Jane’s assault; violent exchanges between Perry and Celeste. They are trigger warnings for anyone who has endured domestic violence or sexual assault.

The Monterey Five – Renata, Madeline, Jane, Celeste and Bonnie are plagued with secrets & lies, being followed by that detective and have become infamous, due to their association with the student gala of last year and the tragic aftermath. Add into the mix not one but now two concerned mothers – Mary Louise, Perry’s mother and Elizabeth, Bonnie’s mother. It seems that when it rains, it pours for our beleaguered five. Nobody gets any slack this episode. Celeste, still grieving, 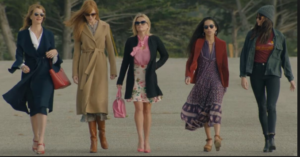 having flashbacks of her and Perry, takes a pill and goes for a drive. As if medication, alcohol and driving have ever ended well. Her Audi ends up all smashed up with Madeline coming to the rescue. En route home, they both see Bonnie, who appears to be in a fog and walking at the side of the road. Each and all are conflicted.

It seems Bonnie is not handling her PTSD very well and you clearly see the effects the murder and cover-up are having on her, mentally and physically. Nathan, already stressed out and in the dark about his wife’s distant behavior, reaches out to his in-laws. Just pour gas on an already open fire, because this situation goes from tense to terse. Bonnie looks as if she wants to run away from her parents – you can see she’s rattled by their presence. Her mother is pretty keen and 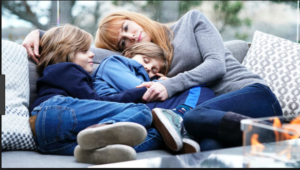 intuitive– outright asking Bonnie, “What did you do now?” Ouch.

Celeste continues to walk on eggshells with Mary Louise. While she’s appreciated the help with the boys, it’s becoming too much and both women need space – something Mary Louise is willing to do, so as not to be underfoot. One thing that keeps repeating over and over, is the friction between Mary Louise and Madeline. These two women are like two dogs fighting over a bone, hackles raised and teeth snarling. Things go from bad to worse to absolutely rancid when the boys have a bad fight and Celeste yells at them, shoving one of them before stopping short as a horrified Mary Louise looks on. The last thing Celeste wants is to be raising two Perry’s – yikes.

Renata – fresh off her power shoot campaign – gets a cold dose of reality when her husband is arrested by FBI. Renata is shocked, angry and on her phone immediately with her lawyer. You can see the agitation in her face. What really annoyed me was the FBI agent who told Renata to calm down. WHEN in the HISTORY of telling someone who is upset, anxious, agitated and angry to calm down ever a good idea? Gordon is arrested and they are in financial ruin. And who should happen to be driving away from the scene – that detective that the five ladies were highly suspicious of. When Bonnie is driving her daughter, who happens to be driving behind her SUV – the said detective. Can we just say that this detective really has an ax to grind with these women? And may I just point out that this detective has absolutely no clue about the domestic assault that Celeste endured over the years? Nor does she know about Jane’s rape and as a result, her son Ziggy is Perry’s child? When you think about it, how many women did Perry end up assaulting over the years? We’ll never know. I understand that law enforcement has their work to do but nothing is ever black and white. Renata is ANGRY – rightfully so. We hear her say to Madeline that she fought and scratched her way out of poverty and all her money is gone. I’d be mad as hell if I was in her shoes. As an aside, her laptop and I-Pad got confiscated.

Madeline looks alarmed. I really hope they didn’t exchange emails about anything connected to the gala. Of all of Renata’s moments though, this one is truly awesome –

Madeline – to her shock, anger and dismay – finds out that her daughter Chloe blabbed to the twins about having a brother. You can see the wheels in Jane’s, Celeste’s and Madeline’s heads turning at a startling speed. This is not the kind of information that you want floating around. You never really know who will overhear, who divulges it and just how bad the collateral damage ends up being. And of course, as fate would have it, Chloe felt it was her place to tell her friends. Madeline is furious with Chloe. Even worse, Jane is forced to speak to her son Ziggy about the whole sordid incident and you get the idea that Jane didn’t want to do this until Ziggy was much older. 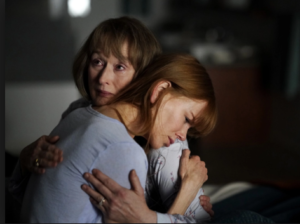 Mary Louise startles Celeste about knowing there’s another grandson in the picture. What begins as an uncomfortable talk about Jane, her assault and the abuse Celeste endured from Perry becomes a tense stand-off. Mary Louise surmises that a lot of information was kept from the investigating officers and she’s going to go to the police because there are too many unknowns and she wants answers. You can see the fear register on Celeste’s face. What’s even more alarming during the conversation is how Mary Louise steadfastly refused to believe that Perry was an abusive man and a rapist. No, not her saintly son, who was rich, successful, good looking and charming. Of course not – and because Celeste never went to the police, there’s no evidence. There’s no repeat pattern of behavior; or police reports; no charges of domestic violence or restraining orders; no doctor’s notes; or friend’s testimonials about the abuse that Celeste endured. No evidence in the eyes of the law. And because Celeste never said anything to her mother-in-law up until this episode, of course, Mary Louise is not going to believe her.

If our ladies hadn’t suffered enough throughout the course of the episode, the last portion of it centers around Madeline and her older daughter having a conversation in the kitchen. Unfortunately, the conversation – a particularly damning portion of it – is overheard by Ed. Ed has endured his share of stupidity and drama – he’s putting out fires that Madeline or her ex-husband Nathan tend to start. It’s got to be incredibly trying on a person to constantly keep a level head and always act with maturity and patience. It’s tough and it’s got to eat away at a person. When Nathan’s not being a total idiot and threatening him, he’s got to deal with his wife fighting with either one or the other daughter. A person can only handle so much before they snap. Ed has it out with Madeline and leaves – as Madeline crumples up into tears and shock. The ending of the episode features all the women in various stages of dismay, uncertainty or shock. Renata is snuggling with her daughter, clearly rattled about what Gordon has done and how much it will cost – financially and emotionally and turns out the light. Bonnie tucks her little girl into bed, happy to be back with Nathan and happy that her husband is going to give her parents the boot. Celeste and Jane have their boys meet and introduce them as brothers for the first time and it’s emotional for both women. Madeline is crying, staring off into the ocean, her future uncertain. Only two episodes in and I have a feeling that the worst has yet to take place.