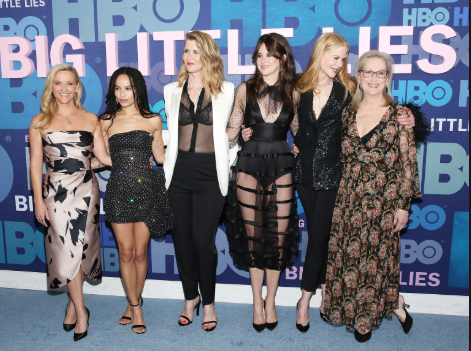 This is just a reminder that BIG LITTLE LIES Season Two is upon us. Once again HBO has this announcement:

BIG LITTLE LIES returns SUNDAY, JUNE 9 (9:00–10:00 p.m. ET/PT), exclusively on HBO. The second season of this subversive, darkly comedic drama will explore the malignancy of lies, the durability of friendships, the fragility of marriage and the vicious ferocity of sound parenting. Relationships will fray, loyalties will erode…the potential for emotional and bodily injury shall loom.

How many episodes will there be? There is a total of seven. Season One creator, writer and executive producer David E. Kelley will be tackling each script, based on a story by best-selling author Liane Moriarty.

Consider this season a delightful bonus as BIG LITTLE LIES was meant to be a limited one-time run series on HBO but due to the critical acclaim, the chemistry between the onscreen talents and writer Moriarty’s willful continuation of the story that a sophomore season even came about.

Season Two, Episode 01 is entitled “What Have They Done?” Following first-day-of-school events, Madeline is worried by Bonnie’s behavior and, later, is shocked when Abigail says she doesn’t want to go to college. Mary Louise, Celeste’s mother-in-law, offers her unvarnished assessment of Madeline’s character. Jane learns from her new coworker, Corey, that she’s known in town as one of the “Monterey Five.” So, right away there is tension building up.

No other details but any of the other episodes are available from HBO except the following titles – Episode 02 on 06.16 is entitled “Tell-Tale Hearts” followed by “The End Of The World” on 06.23. HBOWatch will be reviewing these episodes and the rest through the season’s run which concludes on 07.21.19. Discover what happens to the “Monterey Five” Sundays nights at 9:00pm ET.