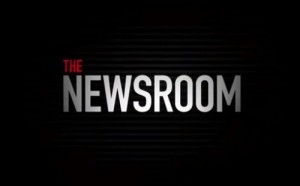 HBO rolls out it’s newest Original Series when The Newsroom premieres with 10 episodes on June 24. Writer/producer Aaron Sorkin, who’s known for films such as A Few Good Men, The American President, Bullworth and Charlie Wilson’s War, as well as being the executive producer and writer for the Emmy-award winning show The West Wing, has his signature style all over the first two trailers. With his trademark witty dialogue and polarizing political views, The Newsroom takes the political satire Sorkin is known for and directs it at the world of mainstream media.The series stars Jeff Daniels as Will McAvoy, a prime-time cable news anchor who becomes a controversial figure when he starts voicing his personal political views publicly, drawing mass criticisms for his outspoken nature. Based in part on the experiences of recently-fired political commentator Keith Olbermann, The Newsroom appears to have all of the smart dialogue, colorful characters, and intense drama that has made Sorkin famous.

Featuring an all-star cast, the show is set behind the scenes at the fictional Atlantis Cable News (ACN). In the first trailer, when asked for a “human moment” during a public Q & A session, Will McAvoy answers, “When you ask what makes us the greatest country in the world, I don’t know what the f—- you’re talking about!”  This typical Sorkin humor is definitely something that fans should look forward to in this eagerly anticipated series.  As Will and his staff are put into position where they try to deliver a nightly news show called News Night, they find difficulties reporting the news accurately due to the concerns of commercial, political, and corporate interests. Executive producer, Mackenzie MacHale (Emily Mortimer), along with newsroom staff Maggie (Alison Pill), Jim (John Gallagher, Jr.), Sloan (Olivia Munn), Neal (Dev Patel), Don (Thomas Sadoski), and their boss Charlie (Sam Waterston), attempt to help Will fill the void and  put on a nightly news show “in the face of corporate and commercial obstacles and their own personal entanglements.” 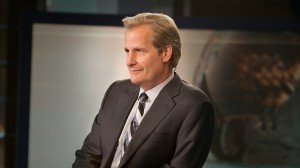 An extremely intriguing aspect of the new series is that Jeff Daniels will play the lead role of Will McAvoy. It’s been along time since his rise to fame during the 1990’s with films like Speed and Dumb and Dumber, but it looks like Daniels still has something left to prove. From watching the trailors, his character seems to be an honorable, yet impulsive figure in the mass media circuit. However, in his own personal dilemma, his beliefs about American politcs and how it has affected society get the better of him, prompting the character to lash out at the corporate infrastructure that has dominated America.

While researching for The Newsroom, Sorkin did his due diligence. As an off-camera guest, he observed MSNBC’s Countdown with Keith Olbermann in order to observe the show’s production and even threw a few questions at Parker Spitzer‘s staff while a guest on his show.  Additionally, Sorkin sat-in on Hardball with Chris Matthews, as well as various other news programs on Fox News Channel and CNN.

Jeff Daniels (Will McAvoy) – anchor of the News Night program on ACN. In the pilot, he is forced to contend with a new team after his co-anchor lands a new program and takes most of his staff with him.

John Gallagher, Jr. (Jim) – a producer who was offered another job when MacKenzie’s previous show was cancelled but turned it down to follow her to News Night. At his new job, he develops feelings for Maggie.

Olivia Munn (Sloan) – a financial analyst with a show on the network. 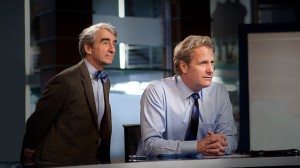 After the series was picked up, Jane Fonda signed on to play Leona Lansing, the fictional CEO of ACN’s parent company. For 10 years Fonda was married to media mogul Ted Turner, who founded Turner Broadcasting System and CNN. Some close to the show have claimed that Fonda’s portrayal is supposed to be a female version of her ex-husband; and that the character’s name is derived from two extremely successful businesswomen, Leona Helmsley and Sherry Lansing.

Also, newly added to the cast are actors Jesse Eisenberg and Terry Crews. Eisenberg has previously worked with Sorkin on The Social Network, playing the role of Facebook founder and billionaire Mark Zuckerberg. According to an earlier post on HBOWatch, Eisenberg may merely do voiceover work and “we’re not sure if we’ll actually see the actor or not but we can’t wait to see what he offers”.

Terry Crews was also added to the list of actors joining the series. Crews, who is probably best known as Damon from Friday After Next, as well as the Old Spice commercials that have become a viral phenomenon, has signed on the play McAvoy’s bodyguard and “life coach”.

If you havent seen the first or second trailers for HBO’s the Newsroom you owe it to yourself to give them a watch.  Anyone else as excited for this series as I am?  Leave a comment below.

Does this show look like a winner? Leave a comment below and tell us what you think. For more information on the series, check out The Newsroom’s page over at IMDB.com.