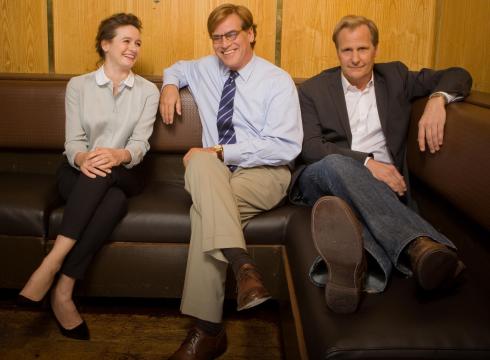 LOS ANGELES, Jan. 13, 2014 – The Emmy-winning HBO drama series THE NEWSROOM will begin production on its third and final season this spring, with debut slated for fall, it was announced today by Michael Lombardo, president, HBO Programming.

“THE NEWSROOM is classic Aaron Sorkin – smart, riveting and thought-provoking,” said Lombardo. “I’m sure this farewell season will be one to remember.”

Created by showrunner Aaron Sorkin (Oscar winner for writing “The Social Network,” executive producer and creator of the multiple Emmy winner “The West Wing”), THE NEWSROOMfollows the members of a cable news team on their quixotic mission to do the news well in the face of a fickle audience, corporate mandates and tangled personal relationships. Sorkin, Scott Rudin and Alan Poul return as executive producers, with Paul Lieberstein (“The Office”) joining the show as an executive producer.

HBOWatch: Damn!  Suprising news, indeed.  We have no other information on this decision but we’ll keep you updated.  At least the series didn’t technically get cancelled.  HBO is confident in the series and most likely would have kept it rolling if Sorkin were willing.