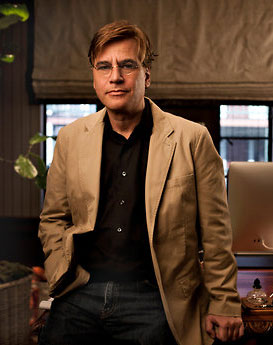 While the final season 3 of HBO’s Newsroom is planned for later this year we haven’t heard a whole lot from the cast or Aaron Sorkin lately.  At the Tribeca Film Festival on Monday he spoke out about his controversial series saying and wanted to clear the air about at least one aspect of the show:

“I’m going to let you all stand in for everyone in the world, if you don’t mind. I think you and I got off on the wrong foot with The Newsroom and I apologize and I’d like to start over,” Sorkin told the audience after interviewer (and former President Obama speech writer) Jon Favreau asked about what he’s learned about the media doing the series. “I think that there’s been a terrible misunderstanding. I did not set the show in the recent past in order to show the pros how it should have been done. That was and remains the furthest thing from my mind. I set the show in the recent past because I didn’t want to make up fake news. It was going to be weird if the world that these people were living in did not in any way resemble the world that you were living in… Also, I wanted the option of having a terrific dynamic that you can get when the audience knows more than the characters do… So, I wasn’t trying to and I’m not capable of teaching a professional journalist a lesson. That wasn’t my intent and it’s never my intent to teach you a lesson or try to persuade you or anything.”

“I like writing romantically and idealistically. I try to balance that with just enough realism so that it feels like whatever romantic ideal is in there is somewhat attainable. It’s not a cartoon. It’s not animated… These are people who are trying to do the news well when market forces work against them.”

He also lamented some of the episodes on seasons 1 and 2 wishing he could have a type of “re-do” of sorts:

“I’ve very proud of The Newsroom. I have the time of my life working with the people that I work with, but there is a learning curve and unfortunately, those lessons are learned in front of several million people. Again, that’s what you sign up for. I wish that I could go back to the beginning of The Newsroom and start again and replicate what you have with a play, which is a preview period… But I’m feeling really good about how the third season is going. I’ll look back on it fondly and proudly and wish I could get every scene of every episode back so that I could do it all over again.”

Well, Aaron you know there IS one way you could actually do that: Don’t stop the show at season 3!  Pretend you’ve got a clean slate and make the third season incredible, then come back next year with a season 4! You don’t have to wish for a re-do.  You can have one now.

Many people, including this fan, enjoyed the first two seasons and the idea of future seasons that are BETTER than those gives us chills. Tell HBO you want to reinvent the Newsroom, make time for the show in your busy schedule and come back and blow us all away.

What say you, Newsroom watchers?