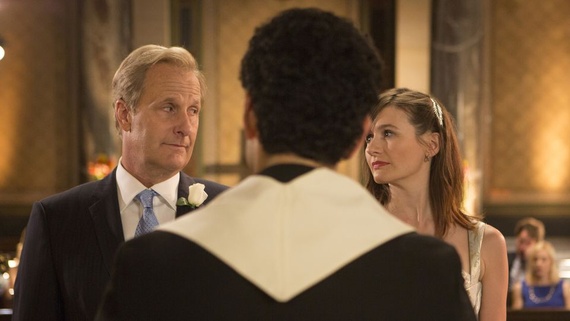 A wedding, an arrest, budding romance, pranks, a corporate acquisition and Charlie Skinner at his finest.

Viewers were treated to all of this in what was arguably one of the best episodes of the Newsroom yet. This episode picked up right where the last left off, with a subpoena in Will’s hands. While it was nice to hear the team try to predict the future, it was a welcome change to hear Mack tell Will to stop acting calm since he has been wrong about everything thus far. In many ways, it seemed like she was echoing many viewers sentiments about him not letting his ego get in the way of making good decisions. We did get a rare peak at Mack and Will having an intimate moment as they sat in their apartment and did what I thought would be the solution to many of their problems…talk. Will is holding on to some vital information that he has refused to share with anyone, even Mack. It was originally understood that he needed to protect the source and couldn’t tell anyone else; however his conversation with Mack reveals that there may be more to the situation than we expected. Perhaps talking about the situation is not the best way to solve their many problems and silence is best. This led to one of the most frustrating cuts for viewers as we never hear the rest of their conversation. Undoubtedly this is a reveal for a later episode but it didn’t stop me from feeling cheated when the scene cut away.

This episode also dealt with the News; not just regular ACN reporting but a look at how it should be delivered and who can hold the title of journalist. This kicked off right after Will made his plan with his team. Charlie, who mostly flew solo on this issue last episode, came over to Will and Mack and requested their help to deal with the new buyer. It seemed like the request was well warranted as they helped keep the peace between a passionate Charlie and mischievous Lucas. Lucas explains (or does whatever it is that he does) about his stance on the news. Charlie rebuts (in a glorious manner that only Charlie Skinner can get away with). I will confess that I originally leaned to the side of Lucas and his digital revolution. However, the depiction of the events in episode one and Charlie’s valiant speech in this episode made me really want to sit down and consider the issue more. Perhaps Charlie is right in his defense of ACN’s delivery and I do want to sit down for an hour and have someone tell me what the F#*k is going on in my life and in the lives of other people. 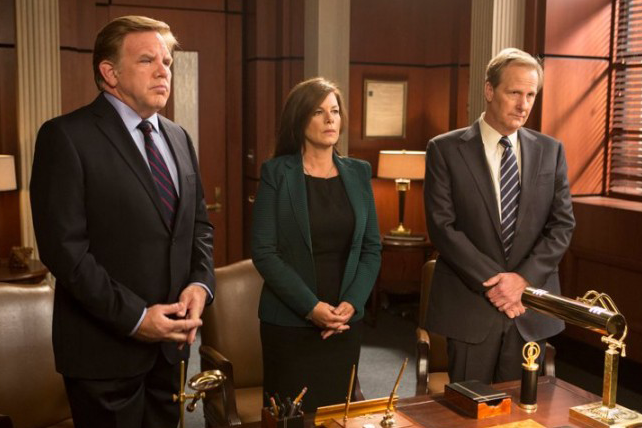 The issue of how the News is delivered isn’t just being considered by Charlie. Jim and Hallie are having a fight with less at stake than Charlie and the gang but a similar struggle. Hallie is making a choice to become a different journalist than Jim is (at least in his mind). The whole situation becomes far more volatile when Hallie writes a personal article. This bring them to the inevitable confrontation on what makes a real journalist; Hallie and Jim representing the Lucas / Charlie debate in a scaled down version but every bit as relevant to the overall theme.

Neil is still MIA and despite the reports of him fleeing to Venezuela, we can’t help but feel there is a little more to this story for him; perhaps he has done all he can do or perhaps he has been in the thick of it all along. It would be nice to see him return to the final episodes since this season has focused heavily on his actions. Also, he needs to come back because with Hallie also gone, ACN’s social media must be nonexistent right now.

It was heartbreaking to see the team lose the big story that caused all of these troubles for them. Reece delivering the news to Mack thugs on your heartstrings and Mack’s outburst really does mirror a lot of our own feelings around the situation. It seems like this is helping them, and us, to get a good idea of exactly how Lucas operates and views the news. He very much is a reminder of the Reece of season 1 who cared about ratings and profits. It was nice to see Reece deliver this news since he has come a long way since season 1 and can understand this issue from many sides. The one upside in this situation was that the story was given to a reporter who we can all feel for. It was a small victory for Mack, Charlie and the team as fight for their view of the news.

The wedding ended off the episode in a bittersweet fashion. The wedding has been mentioned throughout the season and it was great that viewers got to see it before the end. It wasn’t all just about Mack and Will but rather the whole team. They organized that wedding in many ways like how they deliver the news. The team organized and all focused on specific tasks that they brought together for a fantastic result. It was great to see each unit perform their tasks and a particular favorite would have to be Charlie combing Julliard for just the right musical talent. (Speaking of which, if you loved the rendition of Ave Maria from the episode, be sure to check out the singer Katie Boeck’s website here – http://www.katieboeck.com/music)

Check out this Inside the Episode clip and/or look back at episode 3.

With Will on his way to prison and the team reeling from recent hit, you can be sure that the final episodes will be an uphill battle. Knowing this news team though, they would not have it any other way.