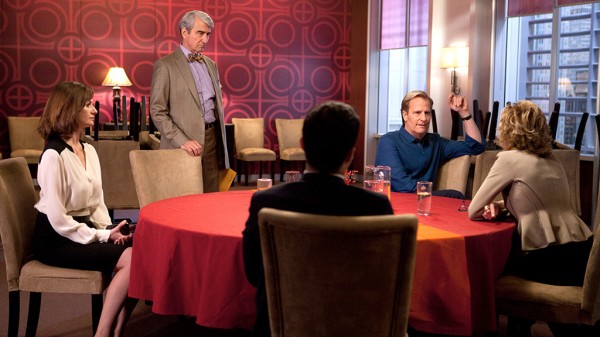 This past Sunday marked the series finale for Aaron Sorkin’s controversial show, The Newsroom. Public opinion on the series has swayed heavily in both directions. Some praise it as the most intelligent, eye-opening series to ever grace the screen, while others condemn it as a self-righteous, misogynistic free-for-all. To me, the truth lies somewhere in the middle. ‘What Kind of Day Has It Been,’ like the series as a whole, is a healthy combination of good and bad, leaving plenty of room for debate.

The episode cuts back and forth between Charlie Skinner’s funeral and the formation of News Night 2.0 three years earlier. While everyone on the team is mourning the loss of their beloved leader, we get a behind-the-scenes look at Charlie’s backroom dealings to bring Mac on as ACN executive producer. I liked these flashbacks for a number of reasons: 1.) It gave Sam Waterston some well deserved screen time in the series finale, and 2.) it showcased Will when he had some fire in his breath. This episode reminded me of how much I miss the Will of old — a ticking time bomb who could go off at any minute, the kind of character that keeps the audience on the edge of their seat. That version of Will simply doesn’t exist anymore, I accept that, but it was good to see him one last time.

Back at the funeral, Will discovers that he’s going to become a father. His jam session with Charlie’s grandson, Bo, started out as the perfect temple-rubbing example of how melo-dramatic this show can get. But I started to enjoy it once Jim and the rest of the crew joined in. Who doesn’t like a little slice of cheese every once in a while? 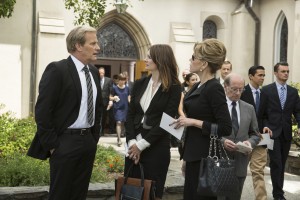 Meanwhile, Mac and Leona confront Pruitt on his misogynistic business model. In order to combat Pruitt’s disgraceful version of ACN, Leona names Mac as Charlie’s replacement, promoting her to news director. This decision felt like a quick wrap-up to a messy storyline. B.J. Novak’s performance as Lucas Pruitt never sold me. It felt forced and uninspired, much like this entire sub-plot. We’ve already seen this fight – entertainment vs the news – in past seasons. This batch of recycled material just doesn’t cut it.

Jim and Maggie iron out the conditions of their new relationship. After Mac is promoted to news director, Jim is promoted to executive producer, but Maggie wants to interview for field producer in Washington. It’s nice to see Jim and Maggie finally… you know what, it’s not nice. I really can’t stand these two and I don’t give a shit about their relationship. Do you? In the end, this storyline was way too drawn out and tiring to deserve any emotional merit.

Don and Sloan are in the midst of a moral dilemma. They blame themselves for Charlie’s heart attack, but all of that is resolved once Mrs. Skinner provides a little closure. She tells Don that Charlie would be glad that he didn’t go through with the rape story. This conflict of conscience was never fleshed out very well. Most of the time it was never taken seriously. It didn’t feel like two people who were deeply regretful for causing their friend’s death. I love these two together, but serious discussion is not their forte.

‘What Kind of Day Has It Been’ is another example of Sorkin clocking out early. This entire season felt like a first draft, not given the proper attention to detail that the first season received. Season 2 was shorted to 9 episodes because of story problems, and now season 3 was shortened to 6. And where the hell was Neal all season!? He’s one of the best characters of the entire series and h 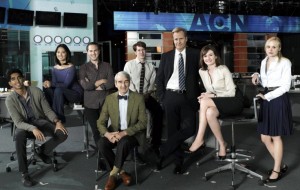 e was left on the sidelines, hung out to dry. Look, I’ve been covering The Newsroom since day one, and I think it’s pretty sad how fast it degraded. None of the storylines came to fruition in a meaningful way. The first two episodes of season 3 set up what should have been an epic ending, but it climaxes with Will talking to the ghost of his alcoholic father. Sorry, but that just doesn’t cut it.

Another thing that really bothered me was the lack of news in The Newsroom. Some of the best episodes and segments came from the team covering big stories that happened in the past few years. Season three started out with the Boston Bombings, and it was a great episode! Why can’t we get any more of that!? Again, I just don’t think Sorkin’s heart and soul went into this season. It felt like a quick wrap-up to a dying show, and Sorkin finally decided to pull the plug. Honestly, I’m sad to see the show end, because there have been so many great moments over the past three years. But I’m even more upset at how it ended. The Newsroom deserved better, and so did the audience.