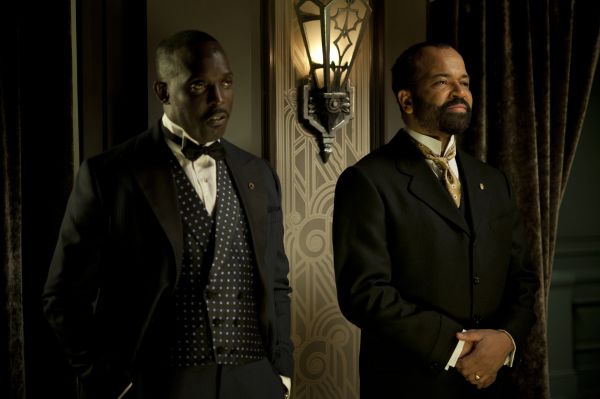 Last week, Richard didn’t shoot a dog (but his sister did, so I now despise her); J. Edgar Hoover introduced himself; Eddie told Nucky that things need to change or he would quit (and he was so right); Narcisse showed up with Dicky’s wife from the season opener, whom he later killed; and Margaret still wasn’t in the episode. I like Margaret, so I’m kind of sad. Season 1 and early season 2 Margaret was much better than later season 2 and all of season 3 Margaret. After Emily was diagnosed with polio, Margaret lost her fire. I only can hope that she returns stronger than ever.

The episode opens with Nucky entering his hotel room in Tampa, Florida, and then we cut to him sitting with Bill McCoy, one of my favorite recurring characters. After hacking open a coconut with one fell swoop of his machete, Bill tries to get Nucky in on a land deal – buy the land, ship in liquor from Cuba, land the boats on the shore, and truck it away. Property is selling quickly in Tampa, as Nucky learns in the bar later on that day. But soon Nucky also finds out that the property Bill wants him to go in on is a bad deal, as it will be near the soon to be heavily populated Pineapple Grove.

Bill, Nucky, and August Tucker, the man with the land deal, sit down that night at Sally’s bar to talk business. Tucker is an abrasive, rude, crude man who offers Nucky a chance to get rich, apparently not understanding that Nucky is already a millionaire. When Tucker makes the offer, Nucky unloads his land knowledge – the trucks will have to go down the main streets of towns daily to make their deliveries – and declines the deal. Tucker is furious and prepares to take it out on Bill.

After the deal sours, Bill confesses that he owes his life to Tucker – his life and $250,000. Nucky turns cruel as only Nucky can when a man comes to him for help and mocks Bill’s position and bad luck. (It’s so sad that Nucky always says “Why didn’t you come to me for help?” when all he does to those who do ask him for help is humiliate and belittle them. No wonder no one comes to you for help!) Turning his back on Bill, Nucky wanders back to Sally’s, where the proprietor, Sally Wheat, asks Nucky if he’s alive (not in the heart-beating sense, but the spirit-sense). For some reason, Nucky feels like he can tell her everything about being a crooked politician and bootlegger. He confesses that Teddy’s birthday is tomorrow, but can’t remember how old he will be and guesses 10. (Last season, Teddy turned 7, so he should be turning 8.) Sally convinces Nucky to go in on the land deal with Tucker and, the next day, sends him a present for Teddy’s birthday. Before leaving Florida, Nucky calls Bill, not knowing that Tucker visited Bill last night. Remember that machete he was hacking coconuts with? Yeah, Bill hacked open part of Tucker’s head.

At the Harrow House

Hugh, a local bachelor, visits Emma and Richard and offers to help her clean out the barn. As long as she keeps feeding him, he’ll come back, he says. After Hugh leaves, Richard offers Emma enough money to cover the property taxes, but she refuses it, saying it’s already been paid. Richard eventually goes out to clean up the barn and, as he looks through some odds and ends, two men walk in, one armed. It’s Carl Billings, who hired Richard to kill someone, only Richard didn’t. A scuffle ensues, Richard stabs Billings’ henchman, and then Richard nearly dies – only to have Emma shoot Billings. It’s plain on her face that she’s horrified Richard made a career out of killing people for hire. When Richard leaves the farm, he hugs Emma and talks about his time in the war, but his affection isn’t really returned. She tells him to account for himself, then walks away. I felt so bad for Richard at that moment. He opened his heart to her, he showed affection which we rarely see from him… and she didn’t care. I understand she’s upset, but is it so much to hope for that Richard finds some happiness and has a place to call home? 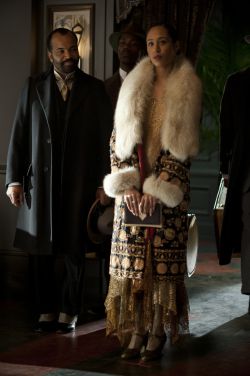 Way Up in Harlem

Dr. Narcisse is leading a discussion at the Universal Negro Improvement Association with several young black men about the condition of the Libyan and how he – the Libyan – can better himself. The good doctor dismisses the class early and guess who walks in? GUESS?! 100 points and a bottle of Scotch to everyone who has ever read anything I write about this show: it’s Arnold Rothstein. Rothstein (who is again wearing a necktie, not a bow tie, but that’s a different discussion) and Dr. N sit and talk about a very lucrative deal for them both: heroin. Dr. N wants 20 pounds uncut, Rothstein agrees: “$80,000 in cash, large bills only [because Narcisse] control[s] the local numbers racket.” And somehow Arnold Rothstein, who is silent, aloof, professional, and extremely polite, offends Dr. N over the “large bills” demand. It was at this point that I threw up my hands in consternation and wondered if Gyp Rosetti had been reincarnated as Dr. Valentin Narcisse – not just because it’s Rothstein, but because Narcisse wants to be offended At least that’s how I see Dr. N so far, from his dealings with Dunn, Chalky, and Nucky. Rothstein apologizes, the deal goes through, and they stand. As he walks out, Rothstein shakes Dr. N’s hand; after, Dr. N wipes his hand free of Rothstein germs and tells Madden he wants Daughter Maitland (Margot Bingham).

We later see Dr. N with Maitland at the Onyx Club. Chalky acts as though he’s never seen a more beautiful sight, and when she takes the stage to sing “Somebody Loves Me,” he can’t look away. Props to Ms. Bingham – that is her voice and she is featured on Vol. 2 of the “Boardwalk Empire” soundtrack. I see nothing but trouble coming from Maitland in regards to Chalky. After the Onyx Club closes for the night, Dr. N is talking to Dunn Purnsley about how profitable heroin can be for both of them and that it can help Dunn better himself. Uh oh…

Piggly Wiggly (yes, I know his name is Roy Phillips, but I don’t want to call him that) asks Gillian to pretend to be his wife for a business dinner, not knowing that Gillian is a manipulative, cruel, self-serving, drug addict, to name a few of her finer attributes (yes, that’s sarcasm). The dinner goes fairly well, despite Gillian saying that Piggly Wiggly tried to marry her while she was underage. That’s an awesome thing to say to a man  your “husband” is trying to do business with. The chemistry between Piggly Wiggly and Gillian is quite good and they pull off being married fairly well. Afterwards, they head over to a diner for ice cream and coffee. Gillian is approached by a man who recognizes her from last season (when she invited one of his friends over for Easter and then overdosed and drowned said friend to fill Jimmy’s coffin). Fake Jimmy’s friend is insistent that he knows Gillian, which she denies; Piggly Wiggly runs him off, and it’s a cue for Gillian to go shoot up. I think it’s so sad that she’s doing drugs and even has to wear long gloves to cover the track marks, but Gretchen Mol plays this so well. As much as I despise Gillian, I love Mol for how well she plays her.

And Lastly, The Junior Bootlegger

Eli’s son, Willie, decides to impress some people he goes to Temple with (namely a girl named Doris) and offers to supply liquor for a party. He and a friend go to Mickie Doyle’s warehouse – OOPS! – and Mickey threatens to call Eli. Apparently this kid forgot the dozens of men that died in the Thompson-Rosetti War of season 3. Willie freaks and walks out, then decides it’s a cool idea to steal liquor. Mickey hits the kid, threatens him some more, then gives Willie the crate of booze. After the party, Willie and Doris make out but are interrupted by the other partiers. The group’s leader, Bucket, makes fun of Willie, who runs. I sense tension in the future between them, but I don’t think I really care. Thompson Jr. means very little to me. More Nucky, Torrio, and Rothstein NOW!

The ending scene in this episode was of Bill McCoy sitting down and August Tucker’s body slumped against the wall, machete halfway through his skull. As the camera pans out from that scene, the focus shifts to a light bulb with a moth flying around it. Ever so carefully the moth approaches the bulb, but, as it tries to land, it can’t. It’s dancing too close to the heat and, if the bulb and moth touch, the moth will be burned. That’s so symbolic throughout this episode. Gillian is flirting with death in her heroin addiction. Nucky is constantly moving in and out of people’s lives and destroying them, one by one. Richard came back home only to be driven out. Daughter Maitland will cause heartbreak for Chalky as he gets too close to her flame and Dr. N. And Dunn has no idea what kind of dangers he is taking on in agreeing to deal with Dr. N and heroin. We’re a quarter of the way through this season, and that’s where everyone currently stands.