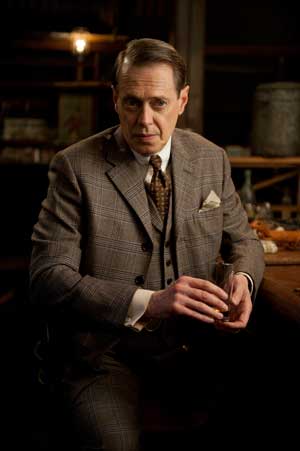 If you haven’t already heard the news: season 5 will be Boardwalk Empire’s finale season. It’s sad to leave people and places that you’ve come to love and expect to visit each fall but as we know: all good things come to an end, eventually.

The latest on the upcoming season comes from long-time HBO actor Michael K. Williams aka Chalky White. At a press event for his upcoming film The Purge: Anarchy Michael was inevitably asked about Boardwalk Empire.  David Crow from Den of Geek gets the hat tip for receiving this answer from MKW in reply to his query:

“The storyline has jumped seven years [into the future], which is why I have the beard now.  The Depression has set in. The days of the shiny shoes and fancy suits are long gone.”

No glitz? No glamour? What about the dancing girls and the fun music, can we at least have that?! I guess the party’s over on the Boardwalk starting this fall but will that still be the Boardwalk Empire we know and love or will it be something darker?

If we’re to take his reply literally (he basically put a date on it!) that would mean the show opens in 1930 or later putting it well into the future (6+ years from season 4’s 1924 setting). This isn’t anything new as season 3 jumped in time a bit as well.

What do you think of the time shift? Will it help give us all some closure to see older, more settled characters on screen? We’ll leave you with Micheal’s tease for where Chalky will end up in Boardwalk Empire season 5:

“It ended very badly for Chalky last year. His family life is no more, and he is desperately seeking Dr. Narcisse to settle old scores.”

The show premieres sometime this fall but when we have an exact premiere date for BWE season 5 to report on, you’ll have it.