This HBOWatch writer stands by his previous declaration “this season is easier to follow than S2 & S3.”  However, the penultimate episode of WESTWORLD Season Four may have some viewers questioning the nature of their reality. Entitled “Metanoia”, the episode opens with a wide shot of Bernard and Maeve 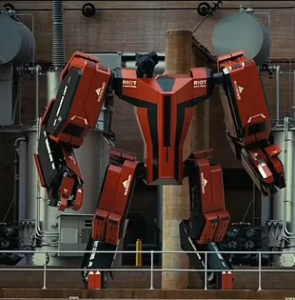 encroaching on the Hoover Dam. The dam provides power to The Sublime, an artificial realm that allows the Hosts to live freely away from Human influence. We have yet to know why this heaven for Hosts is so important to ‘Charlores’, for she is hell-bent on conquering the real world. Perhaps it is a contingency plan for ‘Charlores?’ For Maeve, entering The Sublime will reunite her with her daughter. Likewise, The Sublime may allow Bernard to save some of the real world. Just before the duo meets their demise a-la big-ass riot robots, Maeve realizes that this is all a simulation; one of Bernard’s many test runs to collect data to use in real missions to defeat their common enemy.  However, in all simulations, the outcome is death.  It must be noted, that wide anamorphic cinematography is an indicator that the real world is not being depicted, as seen in previous depictions of The Sublime.

The Bernard and Stubbs bromance is one of the most tangible aspects of the series. Both are Hosts, but this does not make their dynamic tug any less at our heartstrings. The two survived the downfall and destruction of the Westworld park in the first two seasons. In Season 3, Bernard salvages Stubbs from his attempted suicide, and  Stubbs returns the favor by waiting an unspecified number of years for Bernard to awaken from being connected to The Sublime. But the ending of “Metanoia” suggests that their friendship may have ended due to the dire circumstances. Just before departing, Bernard sadly says that Stubbs has little chance of survival. 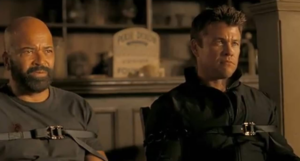 Christina and Teddy return to Olympiad Entertainment, and the former “writes a story” to have the employees destroy the premises and erase all the stories controlling the Humans. Incidentally, this action allows two critical episode plot points to transpire: 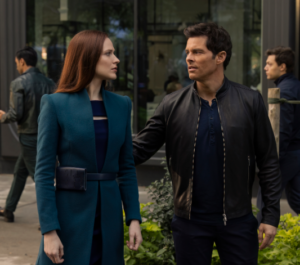 Christina and Teddy walk past Caleb and seemingly do not notice him.  Caleb, startled by the later appearance of Frankie and Stubbs, initially attempts to fight the pair. Frankie says, “it’s me, Cookie”.  Caleb realizes that this is his daughter, and the audience now knows why Frankie at times referred to herself as “C”.

‘Charlores’ prepares to discontinue the Hosts’ habitation of Human cities so that they can transcend their Human bodies by entering the Sublime. Due to her dictator nature, ‘Charlores’ fails to realize that not all Hosts want to leave the real world, thus the reason for many of them committing suicide. Her ego causes her to underestimate one of her most complex creations:  Host William.

Host William is vexed at losing control of the cities. Host William is convinced by his Human self to ensure Humanity’s extinction, and kills the Human William. William overrides the tower’s transmission controls, sending out a high decibel message that causes the chaos the increase exponentially. Human beings are ordered by William to fight until only the strong survive, harkening back to O.G William’s motto of “the survival of the fittest”.

Bernard and Maeve infiltrate the tower and what ensues is one of the series’s best hand-to-hand combat scenes. Maeve battles ‘Charlores’ while Bernard accesses the control room. William, the series’ wildcard no matter in Host or Human form, arrives and kills ‘Charlores’, Maeve, and Bernard. Christina is unable to stop the chaos, and Teddy explains that while the world is real, she is not.

This season has been a wild but enjoyable journey. The ending to was climatic enough to have sufficed for the final episode. “Metanoia” is defined as “a change in heart and/or a spiritual conversion”.  Maeve found purpose in risking her existence when she could have searched for a way into The Sublime without helping Bernard. Host William decides to defy ‘Charlores’ and is back to his old self’s straightforward path of world destruction, which is just as evil but less pretentious than ‘Charlores’s god complex.

Some may feel “Metanoia” has raised so many questions, that the finale’ may disappoint. We will find out August 14, 2022 at 9PM ET on HBO.