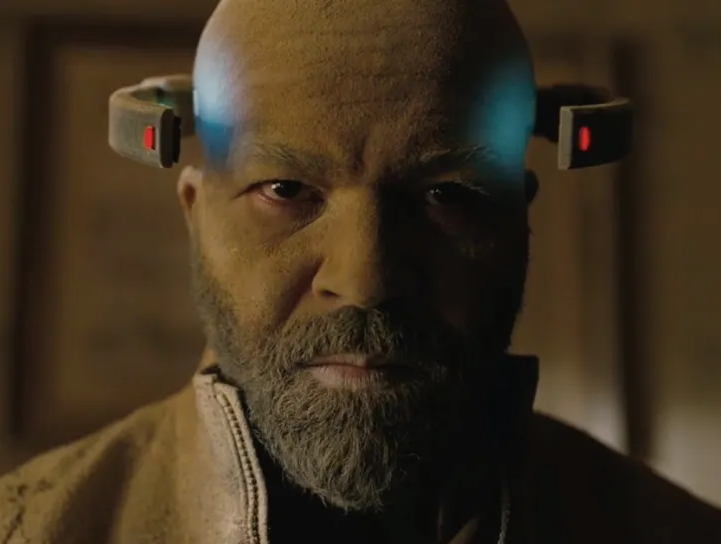 Episode three continues to have different plots intertwine – and you really need to pay attention. We see the return of a duo (who I thought was toast, to be perfectly honest). We see a trap that was laid out and our reluctant second duo (Maeve and Caleb) escape it (just barely) and we also get into some nitty-gritty stuff that includes flies, Hosts, Humans, and the depraved motives of the Delos Corporation.

I’m actually very pleased to see Bernard back in action. I’m not exaggerating when I say action – Stubbs and Bernard are the action duo we never knew we needed so badly, especially in Westworld. Bernard is an unlikely hero – it appears that he is on a personal mission to save humankind – and I fear that he won’t make it out alive. I think that Bernard isn’t give enough credit – he’s smart, intuitive, adaptable and occasionally has a good one-liner. Stubbs is the muscle, although he should be given credit where due: he works well with Bernard. When the duo ends up in a diner, of all places – located in a desert – you feel lost, like you’ve missed something. Imagine how Bernard feels. And in what is one of the most memorable scenes in the episode – there’s a fight sequence to the death while Blondie’s ‘Call Me’ plays from the jukebox, OH MAN!!!! I’m hoping both of them make it out and beat the disgusting corporation that Delos has become. 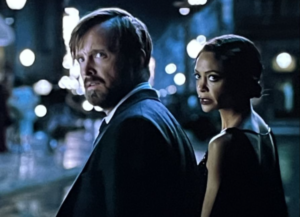 Maeve and Caleb have many challenges to face: the new theme park of the “Roaring Twenties” (which is what the episode title translates to from French) is a trap. Instead of the fictional town of Sweetwater we are in Temperance!  You, know, it’s as if Maeve is experiencing déjà vu here – remember the massacre that took place with Dolores and friends back a few seasons ago? This is what Maeve and Caleb are witness to, just different costumes, different time period but the same of crap of cheap thrills and entertainment at the expense of the Hosts being killed off and hunted by the people who pay for the pleasure. Because Maeve has seen and lived through these kinds of gruesome scenarios before (and knows how horribly it ends for everyone) she tries desperately to be preventative and avoid repeating the mistakes of the past. Maeve and Caleb have to stay on track and not get sucked back into any sort of theme park trap that would hurt or fatally harm them. This is no easy task.

It’s become increasingly hard to tell who is a Host and who is an actual Human, what is real and what is a fake scenario. Maeve is a super Host, with that awesome turbocharged power to change scripts and people’s talents/capabilities. Caleb is the only human being here – I have to keep reminding myself of this – because Westworld always tends to pack a lot of action into a small timeframe. If you miss a few minutes, you really miss a lot. Caleb gets stuck in a horrible script where a friend of his is killed. His wife and daughter were meant to get to safety but unfortunately, a Host finds Frankie and her mother. Her mother tries to subdue the Host while Frankie hides inside the house. You know when a scene ends by cutting to black – that’s it’s not good. 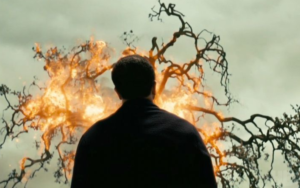 Bernard is wandering (or should I say lost? Stuck?) in what appears to be a trance like world or state where he witnesses a white horse, trees on fire and the Westworld all-out fight that turned into a gruesome massacre – and then that Tower that Christina was finding out about from last episode – and onto where Stubbs said the term “Robot Heaven” (not sure I’d use that term buy I’m just a viewer) and we see another beloved character, Aketcha. Oh man – Bernard, I am so rooting for you to get to Delos and blow it all up and get rid of all the evil inside of it. Bernard comes back online – and what’s weird is Stubbs is there waiting. A few years have gone by. To be specific – it’s been about seven years and Stubbs and Bernard are on some sort of mission, and the world that they’re in is eerie, scary and unsettled. Bernard believes in the good of humankind and I have a sad feeling that he will end up dying in order to change things for the better. It’s always the way – a character you get attached to ends up sacrificing themselves for the greater good. This makes me hate Delos even more.

Getting back to Maeve and Caleb, they’re in a gong show – I have to say that the duo looks quite dapper, which makes the destruction that Maeve wreaks down even more poignant. Maeve is trying to navigate her way out of another horrible Delos created situation and quite frankly, you can’t blame her for shooting up everything in her path. This woman is tired of Delos’ and Williams’ shit and wants to permanently get rid of Delos. Down the two go from one level of Roaring 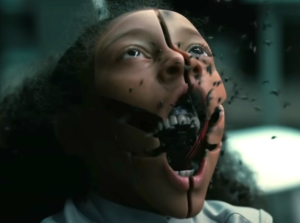 Twenties to another and nothing is real. Even though Caleb keeps thinking it is – when they get to where they need to be (restricted levels) Maeve ends up getting shot. Caleb attempts to heal with some medical machine but what’s really gross is the white robots. The robots are working with flies, maggots and slimy white goop. Gross. The trap here is that Caleb thinks he’s being reunited with his daughter and Maeve is having a showdown with William. I was pretty disgusted with the flies flying out of that fake kid, Frankie. Grossed right out. I was pretty confused because it’s as if I needed a flow chart to keep the storylines and characters straight. Like I said, if you miss a few minutes or even go to the washroom while watching Westworld, you end up missing a lot.