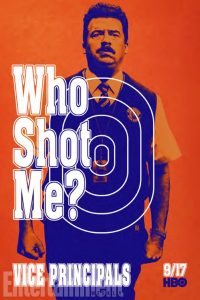 The last season left off with a bang as Gamby went down with two bullet holes and a bit of bloodshed. But with few answers at the beginning of this season, we are watching Gamby struggle to hunt down his shooter. We have to wonder how the rest of the season will play out knowing there will be no third season. Will we ever know who the shooter is?  Or are we going to leave it as a cliffhanger forever?

After Lee rounds up a binder on everyone with a supposed grudge against Gamby, Neal starts making his way through the binder looking for suspects. And he gets pretty busy pretty fast considering his hard demeanor has earned him quite a list of enemies. Most of the suspects appear to be kids from school which is not entirely surprising, though to me that’s unlikely to be the shooter. From a writing perspective, it doesn’t make much sense to me for the perpetrator to be a kid from school. It would be too easy to trace back to them. But that isn’t stopping Gamby from hunting them down.

After a few failed attempts, Gamby zeroes in on a likely kid that he got expelled for selling drugs. But everything is not as it seems and Gamby owns up to doing some sketchy stuff. Luckily he has the sense to realize he screwed up and makes it right while still looking for his attempted killer.

Meanwhile, Lee is having issues with the teachers talking behind his back. He takes his wife Christine’s advice and tries to catch more flies with honey. After bringing in sushi for everyone (yum), they rebuke his kindness and he throws it all up in their faces. After learning Gamby’s shifty business from the past, he takes that same approach and fires a boatload of teachers.

With Lee as principal and Gamby back to kicking ass and taking names, it will be interesting to see how these two continue on in school, especially with Gamby tracking down his shooter.