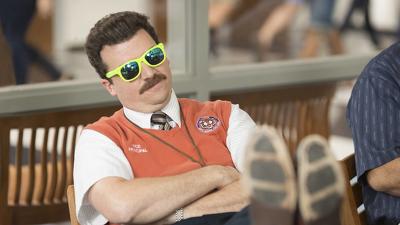 The last couple of episodes of Vice Principals kicked things up a gear by ending relationships, beginning new ones and finally unveiling who our masked shooter was, or so we think. 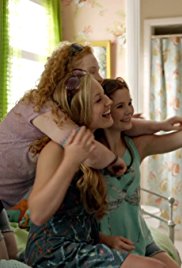 This week is spring break and Lee Russell doesn’t have anyone to spend it with since he and Christine are getting a divorce so Neal decides to invite him to spend spring break with him. He is taking his daughter Janelle and her two friends to the beach for the week. Quite the motley crew with Lee and Neal in charge of three teenage girls bursting with bad attitude and communicating only through their cell phones, it makes for an interesting dynamic. One thing that I wasn’t quite sure about and made me feel pretty uncomfortable was the interaction between Lee and one of Janelle’s friends, the slightly more mature friend who looks more 16 than she does 14. It’s not exactly unfamiliar territory where a father or older man finds himself sexually attracted to an underage girl, and nothing particularly untoward happened, it was more the implication of an attraction that made it quite an uncomfortable episode, especially amid the shit storm currently dominating the news. The episode didn’t need to have that added element to it, but I think it was done to further emphasize the fragility of Lee’s mental state following his divorce. That with the cocaine and strippers and just a general feeling of unhinged craziness all very cleverly make you pity him for the first time. Up until the episodes final moments when we learn that Janelle found the Indian mask worn by Gamby’s shooter in the trunk of Lee’s car…

This episode also had some interesting romantic developments whereby Jen Abbott attempts to come on spring break with Gamby and his daughter because she is just so completely crazy that she would think it appropriate to just turn up. Unsurprisingly, Gamby breaks up with her. Additionally, Amanda Snodgrass, while away at a writers convention with her jack-ass boyfriend Brian (Fisher Stevens), learns that he hates her YA novel she has written and only gave it to his publisher so she would sleep with him. Get a clue, Amanda. So while she is having an awful time drinking in her hotel room, Gamby calls her to tell her that he loved her book. He is her light at the end of a very weird tunnel.

So lets put spring break behind us and move forward to episode eight: “Venetian Nights” 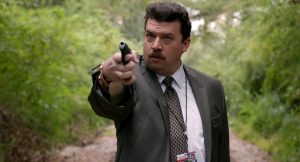 Absolutely convinced that Lee Russell is the one who shot him he instructs him to meet him at the train tracks, where his practiced phrase and wrist propelled handgun are waiting for him. He confronts Lee about his act of violence towards him and tells him if he doesn’t resign by the end of the day he will shoot him. Lee protests to his accusations, in a way that makes you think he didn’t shoot Gamby but perhaps knows who did (did he hire a hit man?) and the following morning arrives at school to raise the flag like nothing ever happened. Gamby is infuriated by his response and Lee doesn’t bother trying to convince Gamby otherwise. He confronts him in his office again, pulling the gun on him ready to pull the trigger like he said he would and instead winds up embarrassed and fired. This then prompts a hilarious, childish fight between Gamby and Russell through the school corridors in front of hoards of shocked teachers and hysterical teenagers. Gamby is caught and escorted from the premises.

He knows that he needs to get the support of the teachers once more, and since Miss Abbott outed him after being jilted by Gamby during spring break and told the rest of the faculty that Gamby isn’t one of them after all because he still spends time with Lee, he is going to need help. Help in the form of sweet little Snodgrass. But first, he confesses to her the truth, the truth about everything he and Lee did to Belinda Brown. Her shock doesn’t last long and they hatch a plan to infiltrate the prom involving none other than reliable Dayshawn and ex-reprobate Robin Shandrell. Unfolding like a great caper, they sneak Gamby in under the disguise of catering staff and we see glimpses of Russell dancing maniacally with 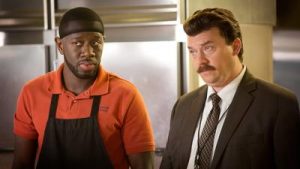 students. They work together to capture him and force him to sign a resignation letter, using his sister’s diaries containing all the horrible and embarrassing things he did during his childhood and teenage years as a levy. Finally, Gamby and Snodgrass return to the prom and kiss under the hateful eye of Miss Abbott who lurks in the shadows, scorned and heartbroken.

As this was the penultimate episode, there are still a lot of unanswered questions and despite Gamby’s confidence that things are finally over, I seriously doubt that they are. Firstly, Lee has never actually admitted to anything, not once has he said ‘okay fine, it was me’. Maybe it wasn’t him? Lee is a weak man and an incredible liar, so why isn’t he spinning a web of lies now? Why is he so complacent? Did he actually sign that resignation letter? I also firmly believe that Belinda Brown still has a part to play in all of this as her picture was so clearly seen on the wall in this episode, a gentle reminder that she is still looming over the story, perhaps. Finally, Miss Abbot. She is a deeply unhinged woman and the look of fire that came over her face was something of pure evil. There is more to her and her story yet to play out. 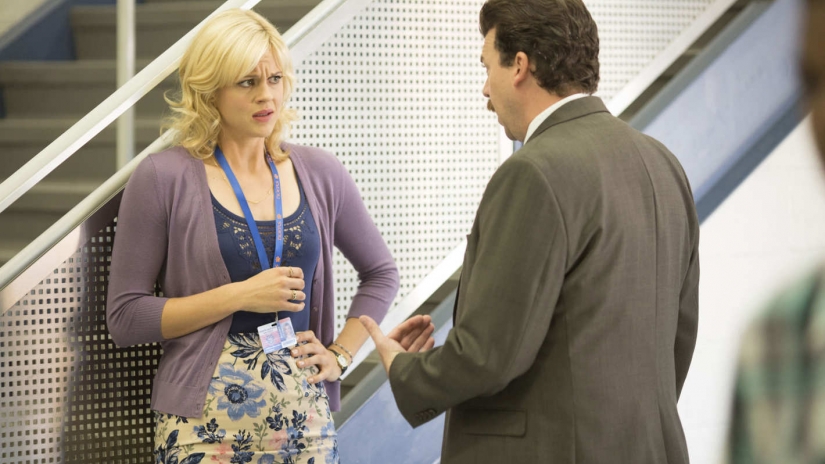 With one final episode left in this ridiculous saga, we can only hope that we will get the answers we deserve. This season has been thoroughly entertaining and clearly a huge amount of fun to write and act. While maintaining a constant darkness throughout, mainly in the characterization of Lee Russell, we have been given some genuine laugh out loud moments and episodes that move with pace and purpose – something that was significantly lacking in the first season.

Can’t wait until next week? Neither can we, especially since we are not acessable to a promo.