Vice Principals has taken an interesting turn the last couple of weeks, I am not entirely sure what story Jody Hill and Danny McBride are trying to tell but it certainly feels like it is building up to something. I’ve been thinking it for a few episodes now and I honestly would not be surprised if the climax of the season resulted in a murder. Gamby and Russell are completely on the edge, if knuckle-dusting a body builder wasn’t enough to prove that, stay tuned. 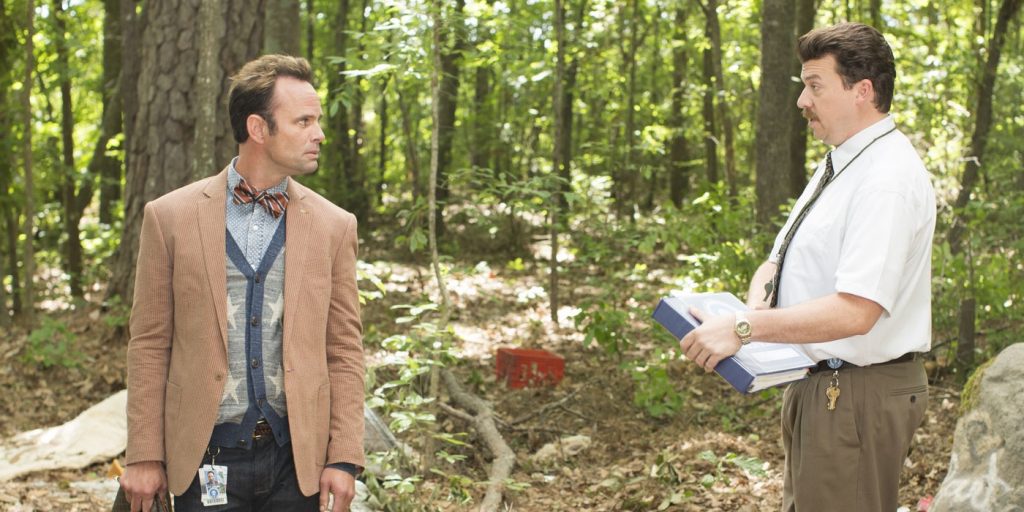 Last week saw a divide in Gamby and Russell’s partnership develop as Russell wanted to sabotage the school’s chances at winning the homecoming football game and Gamby didn’t. Who does that? Anyway, Russell saw it as a chance to further weaken the already crumbling Principal Brown as she struggled to uphold her image of success in front of another female principal from a rival school. Gamby admired Brown’s ability to muster some team spirit among the unenthused students and in doing so championed the football team to winning the homecoming game. The rift only developed further to a complete breakdown in the episode as Russell tells Gamby he doesn’t have his back and that their partnership is over. Little does Gamby know that Russell is in fact fighting his own demons at the moment. His quarrel with a loud and obnoxious neighbor could serve as an allegory for his confused sexual orientation. Yup, we’re going there.

Russell’s flamboyant dress sense, camp characteristics and deep rooted hatred for powerful women has had many speculating as to what his sexual orientation may actually be. Everything about him screams that he is a homosexual, yet he is married to an incredibly attractive woman. The rival with his neighbor, a tall, burly, bearded gym enthusiast who works out to heavy metal music in his garage, mirrors his own conflicts with his sexual desires. Not once in the series so far have we seen Russell engage in anything affectionate towards another human being, the soul object of his desires being the destruction of Principal Brown. Russell approaches the situation when he and his wife are woken up in the night by the music emanating from his neighbor’s garage. His wife, asks him to go and do something about it so he goes over. He timidly approaches the situation asking the men to shut the garage door and he is not met with a favorable response. The men disrespect him and his family, laughing as he walks back home. The second time he approaches the situation, he does it with a bit more of a fire in his belly and tests the water, crossing the actual line his neighbor has drawn in the soil. The result is a punch in the face. The final time he approaches them, he does it with a pillowcase full of soda cans and destroys the CD player, resulting in getting completely beaten up, but Gamby comes to his rescue sporting a set of knuckledusters and beating the man down. Russell takes the knuckledusters and in front of his wife, punches the man again in the head. He then kisses his wife on the lips, leaving his blood over her face and walks home triumphant. What with him metaphorically trying to beat the homosexuality out of himself, referring to Gamby as his partner and gushing over the neighbors muscles it seems pretty clear to me that this was an exercise in outing Russell.

Russell and Gamby’s quarrel also comes to an end as Gamby is subjected to using alternative methods to disciplining students rather than sending them to detention. Brown asks him to conduct a circle with the students and getting them to discuss their problems rather than instantly yelling, swearing, insulting and punishing them. Gamby is rather hot-headed and she watches him lose it with students during a fire drill and takes it upon herself to try and fix him and his bad temper. Initially Gamby hates the circle and thinks it’s a stupid way to fix problems but when he starts to see the circle working, he realizes that he needs to talk to Russell and find out what is wrong rather than shouting and cursing at him all the time, something that they are both very good at doing. When searching for Russell he goes to his house and saves him from the beating his is getting from his neighbor. However, after his moment of admiration for Brown in last week’s episode, Gamby and Russell are back on the same page of hating her again so I imagine next week we will see them continuing in their mission to take her down.

The last two episodes have restored my faith in the program; they have shown an interesting dynamic, somewhere I didn’t exactly expect the narrative to go and one that is interesting to watch. The partnership between Gamby and Russell, despite the two men displaying such awful characteristics, is so watchable and likeable. Their behavior is becoming excusable the more we learn about them, the more we see how unhappy and unsatisfied they are in their personal lives the more we can sympathize with their acts of aggression. We will continue the look at his odd relationship next week.