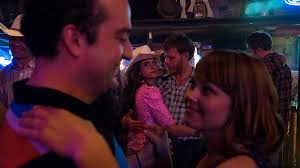 Crazy Tina and Alex go to Houston, and for what grand purpose? So she can crash at her parent’s place, basically boss Alex around the entire time, while getting drunk and acting like a sorority girl who is completely out of control. Alex, in the meantime, is steadfast and loyal – but even loyalty has it’s’ limits.

Meanwhile, back at the ranch, Michelle and Brett are trying – and I STRESS the trying part – to relax and have a good time while out on a date. So, Brett does something that Michelle totally doesn’t expect: he books them a hotel room, so they can be alone and uninterrupted. See that moment right here.

However, this poses a big problem for Michelle: she doesn’t want to have sex with her husband and this is something we’ve come to know in the past couple of episodes. So, what does she do? Hide out in the bathroom of the hotel room, with the water running, in order to call (of all people), her sister Tina.

Tina, having her own issues, tells her sister to go do what she has to do with her husband (in very blunt and explicit language) while Alex hovers around in the background, trying to put two and two together, while laughing at what Tina is saying to her sister. Not sure I’d be calling Tina, as she doesn’t seem to be well adjusted or have her priorities in order, but hey, you call family when you need support, whether it is moral, physical or financial.

Alex and Tina head on down to a country bar to spend some time and catch up with some of Tina’s friends. Alex finds pleasurable company with one of Tina’s friends, Pam, who is a Kindergarten teacher (yes, I can identify with that) and the two really hit it off. The green eyed monster rears its’ ugly head, as Tina cannot stand the thought of losing control over Alex, seeing him happy with another woman, while she is alone and without male company and he is no longer under her spell. Viewers all know that Alex is hopelessly in love with Tina but that she doesn’t reciprocate his feelings. She’s usually having meaningless one night stands and jumping from one mad cap adventure to another. The fact that Alex is doing his own thing, which does not include her, must stick in her craw. 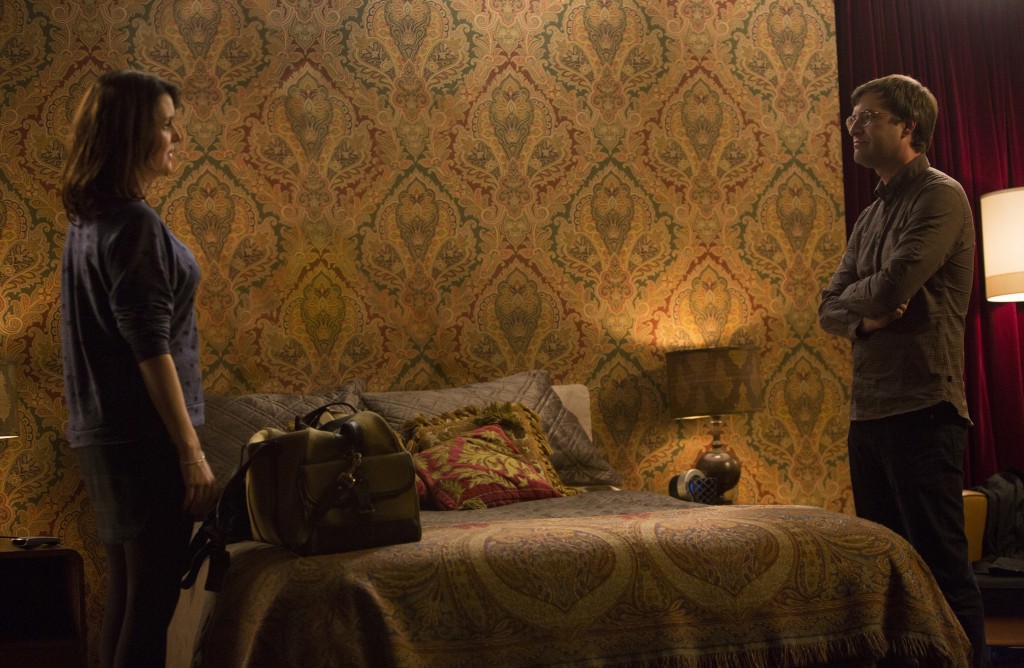 Back at the hotel, things take a turn for….better….or for worse? Michelle and Brett attempt to have sex, only for it to turn completely awkward, full of excessive chatter from Michelle. Look, anyone who is married or in a long term relationship can attest to those moments where things are a bit embarrassing or end with an epic failure of sorts. Trying to ask questions or have some sort of conversation while actually in the middle of the act really changes the mood. And I don’t mean by enhancing it, either. What was meant for a romantic tryst turns into a shouting match and in the heat of the moment; Brett says some very blunt and hurtful things. In a way, I don’t blame him. Michelle lies there, upset and equally defensive about the accusations hurled her way. Then again, she’s been all about the “I don’t want to have sexual relations with my husband,” so you can see why Brett’s patience expired. Relationships are hard – you have to work on them every single day and as time passes, some things improve, while others need mending. Their non-existent sex life definitely needs an injection of sorts. The party was over, before it started and both husband and wife are left stunned and upset. Time will tell if they go to couples therapy, emotionally invest in each other or throw in the towel.

Tina, on the other hand, finds it funny to act totally immature, get drunk, and lead some poor guy on and attempt to show up Alex and his date for the evening on the dance floor. We all know it’s not like Tina was going to go home with Alex. She acts like a complete fool and a rude jerk towards Alex, blocking his romantic interlude with Pam. Alex sees Tina for what she is: acting like a complete controlling bitch. After mending fences, the two hug it out and smooth the rough edges out. How their relationship evolves remains to be seen.

Give a look at what the Duplass brothers have to say about the episode.

And we conclude with a preview of Episode # 5 “Kick the Can.”