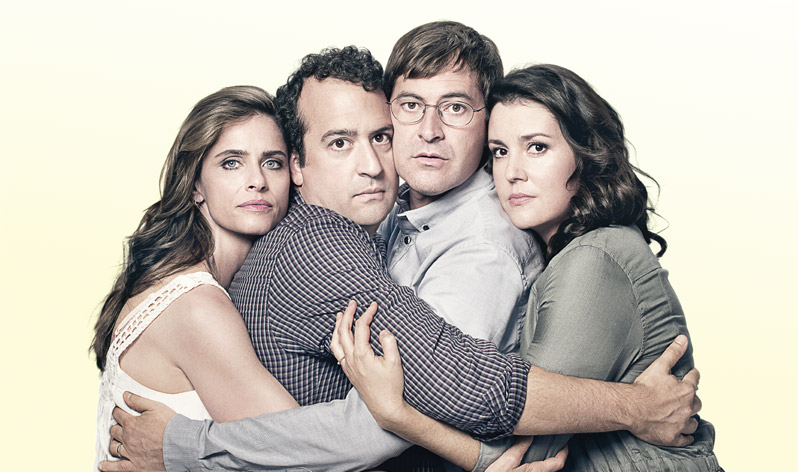 Our mouths just dropped open in surprise. HBO’s TOGETHERNESS will end its run with the eighth episode of the current season which debuts Sunday, April 10. And HBO, who doesn’t seem to care much about ratings apparently is citing numbers as the reason for the cancellation. The series premiere, on 01.11.15 started off at 427,000 viewers that ballooned up to 2.6 million across the platforms but Season Two, which debuted on 02.21.16, has only seen 330,000 viewers. However, the critics loved it; Rotten Tomatoes for one. Of course, the numbers don’t lie – if not enough people were not watching it then it has to go.

The news about this Duplass Brothers production, however still leaves us grumbling a bit. How about you?

First of all, isn’t a series on a network better than nothing at all? In the increasingly crowded TV-scape of today HBO needs content and it needs to keep fans happy and loyal, but instead it seems to drop series like flies. You know, regardless of whether you are a fan of this particular show or not don’t you still question whether HBO can just drop series so quickly and easily? Many followers have grumbled o 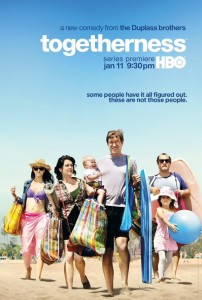 ver the loss of such shows as THE NEWSROOM, DEADWOOD, LOOKING, FAMILY TREE and ENLIGHTENED. All networks have those shows that fill the schedule, but just aren’t on the favorites list. Not all shows can be highly rated and acclaimed. HBO wants every show to be successful like the praised VEEP, SILICON VALLEY and GAME OF THRONES. Well, here’s a news flash, that isn’t possible. So there is no reason why smaller, less noticed shows like TOGETHERNESS can’t stick around.

As for the fans of TOGETHERNESS you will join the ranks of those angered over the unresolved conclusions of many a series before this one. Be forewarned that there is no season three so however the story ends for our characters this season than that is it. Well, there could be the small chance that Mark & Jay Duplass could wrap it up with a TOGETHERNESS movie as they are still within a development deal with the network. ”Although we have decided not to proceed with another season of Togetherness, we look forward to continuing our strong creative collaboration with the talented Jay and Mark Duplass,” HBO said in a statement to Deadline.

As of this writing there are only three more episodes to go. (HBOWatch has been reviewing it all along.)  If Season Two were to play out anything like Season One then a little cliffhanger should be the abrupt end here. We’ll likely never know if Brett & Michelle Pierson (Mark Duplass & Melanie Lynskey)  get back together and raise Sophie & Frankie as they should; whether the charter school will be a success; whether Tina Morris (Amanda Peet) will have kids of her own with  or without Larry (Peter Gallagher) or if she ever truly connects with Alex Pappas (Steve Zissis) again. So, enjoy the togetherness you have left Sunday nights. We know we at HBOWatch will. 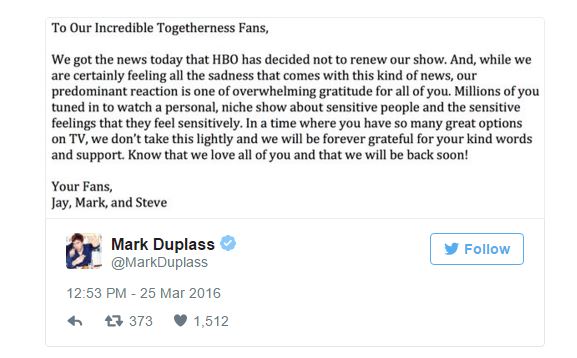