Let me lead this review off by stating that the fact that this series now ends in one more episode opened up a lot of questions of whether it was going to end on the right note. We won’t know that for another week yet. We certainly needed a high & positive moment though, and we got it, but it all went abruptly as it came. That type of back & forth is what makes this shows so real. That is what makes it a treat to watch and that is what makes it a disappointment that it soon ends. But first let’s look at this seventh episode starting with the Inside the Episode clip.

The episode had a few strong moments in it. You know, Michelle is in a funk over her marital status and the last thing she needs is to have the Charter School taken away from her as well. Anna (Katie Aselton) certainly tries to do so by calling for a vote to change the school’s charter over to her. That would have truly broken Michelle and all of us to if that had happened. Luckily, it doesn’t.

Since being kicked out of Alex’s apartment, he and Brett store their Dune project at the school which gives Michelle the idea to pitch an arts curriculum for the school and putting Anna in her place. It proved a great moment for Michelle. But, there is one scene that proved bigger. It was the title scenario – “the sand situation” or caper actually. It seemed an odd and quirky way to bond everyone, but man, it was an 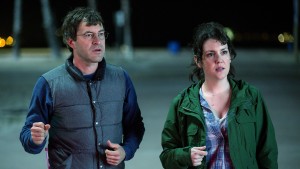 important and necessary positive moment for all. After all, it is all about togetherness, right?  Brett, Michelle, Alex, Tina and the committee all banded together to steal sand so that the school could do the arts theme right at the school. The Pierson’s had a great time together at the beach; they sorely needed that quality time and so did we. It showed that there was hope for them as a couple.

There seems to be hope for Alex and Tina as well. Tina has been reckless and obsessed with getting a man as the means to an end to having a baby. Only Alex, once Michelle told him of Tina’s agenda, could really talk to her about her actions. In the end they agreed to be friends again and saw the necessity to still be there for the Pierson’s in light of what happened after their sea sand heist.

Natalie, the lady Alex had revenge sex with, was part of the “sand situation” and to make a short story shorter Michelle figures out what they had done. Michelle delivers a fantastic rant at Brett. She feels that just because she erred didn‘t give him the right to err also and condemn her for her errors if he committed them also. Some juicy words were screamed, but the shocking ones were her cries of “I’m done.”

Wait, the show concludes in one more episode; how could it end this way? Well, of course it can, because it is realistic to think that their relationship could end just that way. Plus, there is the fact that the Duplass brothers didn’t know the series was ending at this point. How will it all conclude? Will there be a satisfying ending to the series? Is there hope for all four of the characters? Well, if there is perhaps it lies in the title of the final episode “For The Kids.” Check out the preview; check out the past episode if you need to catch up and check out the concluding review next week.