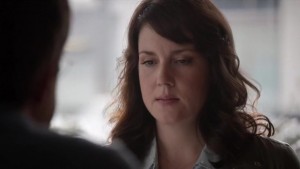 So Ernie and Bert, err, I mean Alex and Brett, have been mulling over some potential television/movie ideas. On the opposite end of town, we see Michelle fussing over the kids while Tina comes to watch over for the day. (Tina started being motherly last episode – Oh boy.) Changes are coming for all of our beloved characters. Change is really the only thing that is consistent in everyone’s lives. How you choose to deal with it is another matter entirely.

So the kids (at least Sophie) are onto the fact that something isn’t right between mom and dad. Understatement!! Brett seems calm and in control and Michelle is very nervous. Can we say that their meeting was truly an awkward moment? What can we say? We found this couple in an unraveling relationship then seemingly got it all back on track….only to be falling part again – due to the adultery on Michelle’s part. Are they destined to be apart? Give them some credit though – they are speaking civilly towards each other but you can definitely get the sense that they don’t know which direction they are headed in. So then maybe there is still hope for Togetherness  or perhaps a meeting in the middle? Money, time with the kids and where to go from here is all on the table. A marriage on the brink of break-up is a huge change. What was once safe, secure and consistent is no longer stable. (Brett reflects on this much later in the episode and the Duplass brothers look at it in the Inside The Episode clip.)

While Alex is getting a bit of the run around at work, he feels slighted at the changes to his script, character and wardrobe. I think everyone likes a little advance notice but you can tell he is not pleased with these abrupt changes. Tina goes from one silly situation to another – picking up the kids, diaper duty and a big kitchen mess – only to let go of having total control and actually spend 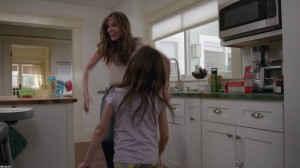 ing some quality time with her niece and nephew. In fact, she actually looked like she was enjoying running through the sprinkler in the backyard with Sophie.

Back to reality: Brett does the whole “making an appearance” in front of the kids and Michelle and then leaves abruptly. I mean, this is to be expected because he’s still hurt at the revelation that Michelle slept with David. It’s not like it’s putting a puzzle together completely. Brett’s still trying to figure things out but you can tell that Michelle is still stumbling; as if she’s grasping at straws. It’s anyone’s game whether or not Brett will eventually come home. Brett, for his part, is not thinking of the future state of his relationship with Michelle at all. The issue won’t go away just because he refuses to address it.

Tina makes a startling revelation that she actually enjoyed spending time with her niece and nephew. So much so that she drops a bomb on her boyfriend – maybe, just MAYBE – she wants to have a baby. Larry is stunned at her admission after all, how many times in the past has Tina sworn off kids and how she has lamented that she can’t handle them, that they are tough to deal with and how  she can’t fathom how her sister and brother-in-law  can do it? Yeah, that conversation takes a steep nose dive and Tina slams the door.

Brett is having conflicting emotions: he’s in “the 50 – 50 spot.” I’m willing to bet that a lot of people who have problems in their marriage go through this phase of doubt and insecurity. He’s confused, angry but almost 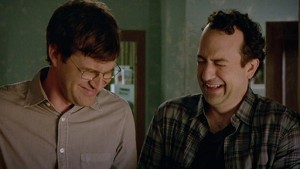 t willing to try and work it through. He and Alex end up tying on a few and in a hilarious chain of events, go back to Alex’s place. You can tell Alex isn’t happy with the way things have been switched around at work, so going out with Brett allows him some down time. Brett, for his part, enjoys going out with Alex, as it allows him not to dwell on his marital issues. Sooner or later, people have to own up to reality. Once back at Alex’s place, Chrissie isn’t too keen on having Brett hang around….as she wants some “adult time” with Alex. Oh Alex, your career is on the rise, you have an awesome best friend and an attractive girlfriend who wants to spend time with you (she’s been keen on wanting to spend time with you but you’ve been ignoring her). Bummer, eh?!

Brett ends up back home, on the couch, having a heart to heart….with all people, Tina. It’s a good chat; they keep it on a serious note. Tina, who has always been very insecure, especially with her failed relationships and business endeavors, seems to really open up to her brother-in-law about the idea of having children. She appears pretty downcast after all, she’s failed at a lot and in looking back at her life realizes that there’s something missing. The only one who seems open to a big dose of change is Tina. Now, I’m not saying that having a baby will be the be all and end all to Tina’s problems, but maybe this is something that may well give her a sense of purpose and responsibility. Brett surprisingly encourages her about this. I don’t know who was left more surprised at the end of this episode – Tina, or myself, as I stared at my screen, mouth agape.

Interesting resolutions to all these matters are in the offing. Here is the preview for Episode # 5 “Just the Range.”