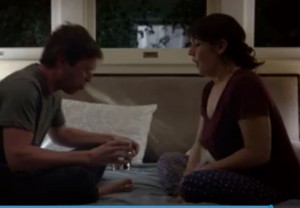 With only eight episodes a season for TOGETHERNESS the inevitable had to drop pretty quickly and it did. At the end of last week’s episode (“Everybody Is Grownups”) Michelle dropped the bomb to Brett that “she slept with David.” Now, in this current episode we learn how Brett handles the news and how he doesn’t really address it; Alex is with him every step of the way. In fact, both parties are with their respective support staff as Tina is with Michelle. If you recall Tina wrecked her car and so spent the night.

I liked this episode, but was also a bit put off by it as well. Basically, Brett bolted out of the house and ran until Alex caught up to him and they drove around to give Brett time to collect himself, except Brett didn’t want to do that; he wanted to disconnect instead. That is when Alex comes up with the plan to travel to their childhood neighborhood back in Detroit and let go because things were more carefree then. Off they went to do a round of Advanced Pretend. They revisited college haunts, old friends and childhood dreams. All good in itself, but I found it all a bit off by episode end. The Duplass Brothers loved it though as the “Inside The Episode” proves.

My fault with it all is the juxtaposition of this episode. As a standalone episode it would be A-Ok; I’d completely understand if Pierson and Pappas went on a little road trip to reconnect, recharge and refocus. But, after Michelle’s reveal I had a hard time accepting that heading to Detroit was the best you could come up with and to boot when the boys dug up a childhood time capsule in Mr. Pierson’s (Michael Gross) backyard Brett seemed to have an epiphany…but we already had one of those last year. How many does he get?

You can’t forget Michelle. She is devastated also. In the few moments we saw of her it was clearly conveyed. What is also made clear is that Brett needs Alex and Tina is at her best when she is helping someone. Obviously she is there for Michelle but she is also there for Frankie with some serious diaper duty. Hey, we got to keep that comedy in there, right? We are also reminded of Tina’s issues as she remembers that Christy stayed the night also. All that will come to a big explosion soon I’m sure but, for now, it is still just at a hard boil.

Again, don’t misunderstand me when I say it was a good episode I just wasn’t keen on its timing. I might be the only one who thinks so; let me know in the Comments below. As for next week we still have the support teams in play; Tina helps with the kids and Alex is just the best pal around.