With half the season over, (find Episode 4 here) this episode proved to be a turning point for the season and for the characters. It’s a matter of self discovery for all. Alex discovers a kindred spirit. Tina discovers what she really wants in life. Michelle discovers how to be courageous. And Brett…well, he discovers what it is like to have a catfight in the backseat while you’re driving.

Alex is working on the movie set in which the original image provided to him is being constantly changed.  From typical Dracula style vampire, he then becomes a vampire who is also a pimp.  Which, never really got explained, but we did get a nice shot of Alex wearing a gold chain and an outfit I can only assume was a re-wear from The Sopranos.  But now with a new director, everyone is on edge and tense and Alex is wearing a gothic-meets-fetish-club outfit.  The new director (Joshua Leonard) turns out to be the same one who doesn’t appreciate true coyote sounds and helped ruin Brett’s career from Season One.  As Alex is ready to dismiss the guy, he admits to having substance abuse issues and being a huge Dune fan. Hey, I smell a new bromance blossoming. 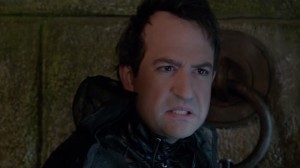 Tina is continuing to care for the kids and enjoying her time with little Frankie – minus the massive poop issue.  But from what I hear about children, that sort of thing is not uncommon.  Her sugar daddy Larry sees what Tina can’t: that she wants kids, and confronts her about it.

Michelle’s work with the charter school and her budding friendship with Anna (Katie Aselton) are holding her together from the emotional wreck that is her marriage.  I can certainly relate to the crying while eating phase she is in.  If you haven’t, I don’t know if you can say you’ve truly lived.  Anyway, Anna helps Michelle stand up for herself and provides some welcome relief from the torment of her broken down marriage.

As for Brett he continues his work on the Dune play and finally lashes out at Michelle.  I can relate to the fear of silence.  When someone is mad at me, I can’t stand the silent passive aggressive act.  Because then I wonder if the person even cares.  Better to have them yell so that at least I know.  Which is the same suspended terror we’ve seen Michelle enduring.  Brett also continues working as an Uber driver and endures his own suspended terror as two women turn his backseat into a wrestling ring while he’s stuck driving.  But his work with Uber isn’t all bad, as we see him meet a cute woman and we enjoy a lovely cliffhanger for the next episode.  So often in plots of infidelity, the cheater tells the cheated to go have an affair of their own to get even.  But what are the emotional ramifications of doing so?  Does that fix the situation or only make the gap between spouses that much larger? All issues left unresolved here. Let’s take a look at next week to see if we get a hint of things improving.

Tina appears determined and ready to move forward with her new life choices.  Alex attempts to mend fences between Brett and Coyote Director Guy (as I shall affectionately refer to him as now).  Michelle appears slightly intimidated by Anna’s life and I wonder if jealously will reign over the day.  Adulthood continues to be entirely too complicated.  I think I will revert to my childhood where I colored all day and other people had to clean up my shit for me. Look for TOGETHERNESS Sunday nights at 10:30pm.