UPDATE: We’ve got the set and have reviewed it! – Read it here.

The wait is finally over. One of HBO’s biggest, most popular and certainly most award winning series of all time is headed to Blu-Ray to be “made”.  And by made we mean: given the gangster treatment (and that’s a good thing in this case). 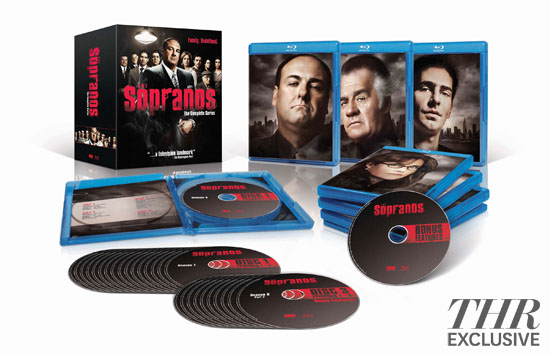 The Hollywood Reporter was given the news first that The Sopranos Complete Set on Blu-Ray would be arriving in a special package this fall, November 4th.  Just in time for the holidays. The MSRP will be set at around $280.  We’ve updated our Sopranos on Blu-Ray and DVD page to reflect this change.

According to THR the bonus features will be gangster as well:

Included in the set is a free digital HD copy of every episode and more than five hours of bonus material including lost scenes, two roundtable dinners with the cast and crew, 25 audio commentaries as well as a new and exclusive featurette exploring how The Sopranos was created and ultimately transformed the TV landscape.

Right now the best package available is the 30 disc DVD set for well under $250 and seasons 1 and 6 were both available on Blu-Ray individually. This, however will be the first time we’ll get a complete set for the entire Sopranos series in Blu-Ray format.

REMINDER: If you’re an amazon prime member you can stream all of the sopranos to any device any time you want. No word on whether these special features will be included online anytime soon, though.  You’ll want to see this at the very least (from the THR announcement):

We wish Mr. Gandolfini, who passed last year,  were around to add his voice to this special presentation of The Sopranos. This show meant a lot to him and we’re sure he would have wanted to be a part of it. HBO recently aired a special on this great actor and man so be sure to find that and watch it if you’re missing the big guy.