“Well, will one of you please fuck Mrs. Halliday?” 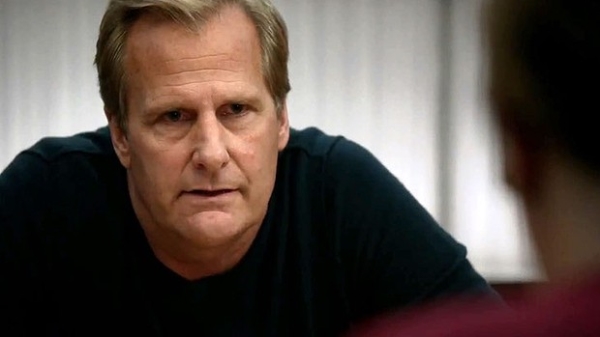 Will McAvoy (Jeff Daniels) made his return to the ACN Newsroom this past Sunday in an episode that rivals its series opening counterpart from season one. ‘First Thing We Do, Let’s Kill All The Lawyers’ is newly stylized, refreshing and seems to address many of the scrutinizing critiques surrounding season one. The season two premiere opens with a much improved title sequence and picks up 14 months after Will’s verbal attack on the Tea Party, aka the American Taliban, using flashbacks to reconstruct the events leading up to that point. Flashbacks are certainly nothing new to the series, but Sorkin does a fine job of creating questions from the very start – The meeting with AWM attorney, Rebecca Halliday (Marcia Gay Harden), Maggie’s (Alison Pill) new look, and the tension surrounding the classified black-ops mission – Genoa. 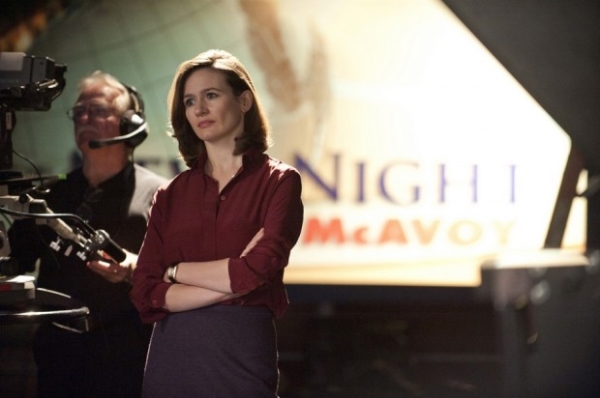 Before we dive into all of that good stuff, lets get all of the personal issues our characters have been struggling with out of the way:

Neal (Dev Patel) is still in pursuit of his first big story. Occupy Wall Street is currently in the beginning stages of development and Neal attends one of the movements preliminary meetings, hoping to understand what OWS is all about. It was refreshing to hear the political motivations surrounding the movement rather than focusing on the bizarre hippie overtones. Either way, this is certainly a step up from Neal’s ‘Big Foot’ pitch from last season.

Jim (John Gallagher Jr.) has had enough of Maggie and Don’s disgustingly cute office relationship. After a producer sustains an injury on the Romney campaign, Jim sees an opportunity to get away for a while by heading to New Hampshire to fill his shoes. Jim soon discovers that the trip north is anything but friendly. Apparently, the Republicans were quite offended by McAvoy’s insinuation – shocking, I know. Jim’s escape seems rather premature after we discover Maggie’s ‘Sex and the City’ confession has found it’s way to YouTube. After confronting Maggie about this laughable insight, Don (Thomas Sadoski) moves out of his own apartment… yea. Basically, this relationship trio continues it’s downward trend from last season.

Jerry Dantana, (Hamish Linklater) a producer from ACN Washington, makes his way to New York to fill in for Jim. The ambitious new character shares Sloan’s (Olivia Munn) passion for in-depth investigations on the Obama administrations drone program in Pakistan. After Will refuses to counter against the panel, Jerry’s expert confides that he has knowledge of a story that ‘makes careers and ends presidencies’ – Genoa.

Which leads us back to the good stuff, and when I say good stuff I’m talking about Will McAvoy. In light of Will’s attack on the Tea Party, Reese Lansing (Chris Messina), President of AWM, is shunned from a House Judiciary Meeting on SOPA, raising the stakes for AWM’s involvement in Washington. Charlie (Sam Waterston) is forced to make a tough decision, pulling Will from coverage on the 10th anniversary of 9/11. Will’s relationship with the audience and MacKenzie (Emily Mortimer) is still an ongoing matter of interpretation, but it’s clear that his conflicting interests from season one have carried over.

‘The Newsroom’ is still suffering from a pretty blatant lack of political balance and continues to spew out some pretty laughable, melodramatic moments (check out Don’s departure from his own apartment for reference). Sorkin makes no effort to hide his personal opinion on drone strikes, using McAvoy as the scapegoat to defend the program. Disagree? Thats fine, but you can’t deny that characters who are against the use of drones were set up as the ‘good guys’ while those on the opposite side were either ignorant or cowardly. I was really hoping that the dialogue surrounding issues such as these would support both sides of the political spectrum, but it doesn’t look like thats going to happen.

Its almost as if Sorkin doesn’t want Republicans to watch his show. Republicans = bad. Democrats = good. Plain and simple. The one saving grace, as far as balance is concerned, is that the drone program has been heavily utilized under the Obama administration. Ok, I’m starting to swerve from the point, but you know what I mean. 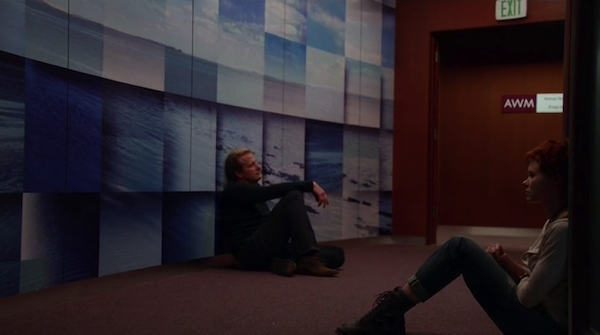 ‘First Thing We Do, Let’s Kill All The Lawyers’ is, in my opinion, the best episode of ‘The Newsroom’ to date. If you disagree, feel free to state your reasoning in the comments below. The stakes from season one have returned, the threat of Will being taken off the air, but now the entire ACN news division is in jeopardy. The aftermath of Operation Genoa will slowly unveil throughout the season, giving us a solid foundation for conflict which wasn’t introduced until episode 3 of last season. Even scenes that may not be directly correlated with the main plot have received an upgrade. Mac’s handling of the switchboard error was an awesome display of ‘heads up’ thinking. The coverage of the rebel takeover of Tripoli and the on-the-spot edit of the ex-IMF Chief were also subtle but entertaining tweaks in the episode.

To put it simply – shit is actually happening. Jim leaves, Neal has a story, Maggie and Don are finished (I think), Jerry is already stirring trouble in the newsroom and once again Will finds himself on the hot seat. Is this sudden influx of information due to the downgrade to 9 episodes for season 2? We’ll have to wait and see, but if things continue at this pace you won’t hear any complaints from me. 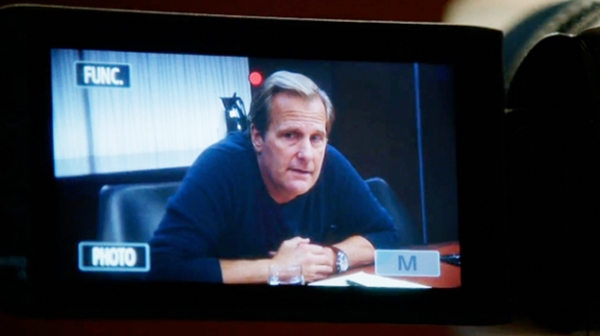 All in all, the highs outweigh the lows in this episode. I’m looking forward to another great season of ‘The Newsroom.’ Are you? Join the conversation below and let the HBOWatch community know what you think.