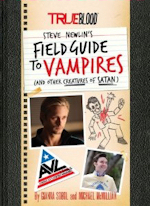 Not so long ago, Reverend Steve Newlin was human, and like many of us, he kept a journal of sorts. [amazon_link id=”1452127425″ target=”_blank” container=”” container_class=”” ]Steve Newlin’s Field Guide to Vampires[/amazon_link] chronicles Steve’s human life, discussing supernatural beings, Newlin’s ex-wife Sarah– and other creatures of Satan.

Steve’s focus, of course, was on Vampires, listing their strengths and weaknesses, their laws, and how to kill them. Eric and Pam have gotten their vampire hands on the Guide, and leave handwritten notes for each other correcting Newlin and mocking him along the way.

Written by Michael McMillan (Steve Newlin on True Blood), and associate producer Gianna Sobol, the Guide promises to provide new observations of story lines and characters, such as his relationship with then-wife Sarah.

The book includes a Bon Temps tourist map, along with pictures, notes, letters, postcards and Steve’s hand drawn “illustrations.” Waiting for season 7 sucks, but Steve Newlin’s Field Guide to Vampires will be available just after October 29th– giving us something to sink our teeth into while we wait.

Watch Michael McMillan discuss the book and and get a little peek inside in his promotional video: