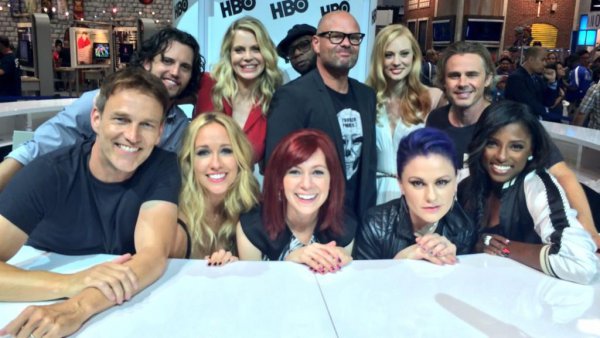 There was definitely a bittersweet feeling when looking at the stream of incoming Comic-Con pictures and tidbits.  Most diehard fans find themselves anxiously counting down the days until the famous San Diego event, which always seems to provide exciting news about all our favorite shows. Despite this being the last year the True Blood gang will attend representing the widely viewed HBO show, they approached their panel with the same excitement as their very first year.

There were a lot of highlights from the very last meeting of our beloved cast. Perhaps one of my favorite being the way the cast reminisced about their first day shooting. Sam Trammel (Sam Merlotte) laughingly retold his experience saying, “I just remember that ‘The Suite Life of Zack and Cody’ was shooting next door and we had all of these naked bloody people walking around.”

Most of us fans have found the flashbacks of Bill’s human past to be more than a little dull this season. Executive producer Brian Buckner stated that the show had gotten to the point where Bill was viewed as a Vampire God and they felt that it would be important to bring him back to reality. Logically, it make sense but I’m not sure if the thought is actually transferring to the screen.

We did learn that we have not seen the last of Rutina Welsey (Tara) which made me happy. Though, they didn’t confirm if we’d only be seeing her through her mother’s drugged hallucinations. Personally, I’d be happy with another grand resurrection because the show seems so good at them.

On the relationship front, a brief mention was made to James’ new bisexuality and how his relationship with Lafayette is in no way done involving, though no mention was made to the actor change or the speculated reasoning behind that change. There was a minor discussion of Arlene’s possible new love interest and how she will finally get a vampire lover like so many of the other characters. My inner Terry-lover was very upset with this but we’ll see how it goes. As far as Bill and Sookie, they weren’t giving much away though real life couple Anna and Stephen did gush about how happy they were to be working together again.

Surprisingly, we found out that Sam Trammel often reads for Eric during table reads because Alexander can’t typically make them. The fact that shapeshifter Sam can do an impressive Vampire Eric impression is endlessly entertaining.

One of my favorite parts was while the cast discussed their souvenirs  they’ve taken since the show’s end and Nathan Ellis revealed that he has been stealing from the set for the entire show by just “forgetting” to bring back pieces of his character’s wardrobe. As if anyone else could ever pull off Lafayette’s unique style.

If you’re anything like me, you’ve grown attached to these characters and these actors over the last seven years and seeing them get together for the very last time at this event and talk about our last visit to Bon Temps was oddly nostalgic.

The extended preview of the rest of season seven definitely didn’t hurt either!