I don’t understand how some of True Blood got to where it is. Does anyone know exactly how Holly escaped, or why they took her out hunting in the first place? There’s other stuff that doesn’t make sense either. Take Alcide’s death, for example. Senseless, stupid, no logic or justice. Then there’s Maxine Fortenberry– that was a death only slightly less completely satisfying than Russell Edgington and took FAR too long. Now we’re wasting valuable screen time notifying relatives who were Never In This Show. I guess we’re going to have The Return of Hoyt and Grandpa Terminator for the final big battle– or maybe a big double funeral so we can have more filler material to compliment the Unnecessary Flashbacks. Take time to say goodbye to Alcide now, before anything else happens:

Incidentally, it’s the vampire apocalypse, and the only thing standing between you and certain death is Jason Stackhouse. Discuss in the comments.

Does anyone else feel like they’re being fed a bunch of marshmallow fluff with these? The only pertinent thing I got out of them this episode was the tunnel entry that they used to get into Fangtasia. I totally would have bought a tunnel entrance with any kind of one or two sentence explanation because Eric is Eric and he would have secret tunnels like that. That, and there is no logic on this show. I didn’t need valuable screen time eaten just to establish another Fangtasia secret door and see Ginger not screaming. GINGER SCREAMS. That’s what she does. Anything else is a waste of material. I did smirk a bit watching Eric struggle with a mangled VHS tape, but the gags are not worth it. Maybe there’s another Chekhov’s Gun here that we’ll see again later, but I doubt it. 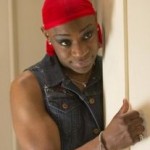 Ladies and gentlemen, I present the cure for everything that ails you, Lafayette Reynolds. I don’t really care about the Jessica story (more wasted screen time), but I do love time spent with Lafayette. I wish I could talk to people like he can. He just sits down with Jessica and in a minute or two she’s having a snack after months of of a starvation diet. Granted, this is all at the behest of Sookie, but he always knows exactly what to do and what to say. When this show ends, I want Lafayette with me, because he’ll know exactly what special recipe I’ll need in my shot glass to get by. Plus he’ll bring me something deep-fried and rolled in sugar to get started.

Sookie promises Arlene’s kids that she is going to bring their mom back even though at that point it’s anybody’s guess whether Arlene is still alive.

Sookie decides who lives or dies. Remember how she got Pam to turn Tara into a vampire? Then she refused to have Alcide turned. Neither of them got to choose. In this episode, she got a healthy vampire to give Arlene blood so she would live. Arlene didn’t really have much of a choice either. How many times has Sookie done this?

Sookie gets Jessica to eat after months of self-imposed starvation.

Sookie feeds Bill, which of course has absolutely nothing to do with her wanting to get back together with him until Eric shows back up sick as a dog– and Alcide hardly cold. (Speaking of dogs.)

Sookie commands vampires and humans to perform miracles by feeding each other and doing anything she says.

Sookie violently mind-probes Holly. Everyone does the obligatory protests, but nobody tries to stop her.

Sookie will never have to answer for any of this, because NO LOGIC and NO JUSTICE. Oh, and no more seasons. 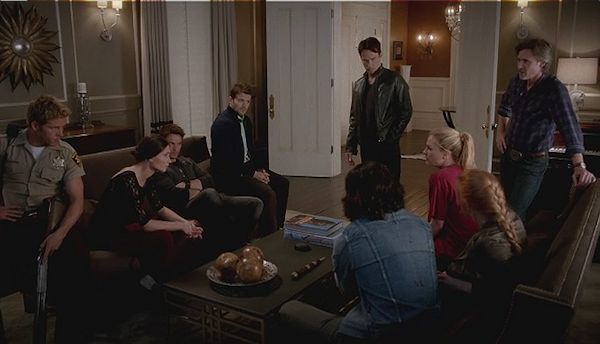 It looks looks like Team Torch and Pitchfork have lost for good at the Battle of Fangtasia. It wasn’t exactly D-Day as Jason predicted, but it was nice to see some action as that thread came to a close. I have to give Bill a Certificate of Recognition in Creative Killing for using a stake in the head to dispatch the ex-mayor before he could take out Bill’s ex-anorexic progeny Jessica. However I think the Hep V vampires and the vigilante humans pretty much took care of each other. Did anyone we care about die? I don’t think so. No thanks to Sookie, who huddled up with Arlene the whole time because we cannot risk damage to the Special Snowflake. (Nice way to shoehorn Terry in there by the way.) Hey, has anyone heard about the new fairy in town? Her blood sparkles at extra-strength and she invites vampires into her house. Maybe SHE could be a snowflake and Sookie could go be a waitress. Does anyone else think if there’s a Hep V cure it’s going to have something to do with fairy blood? At any rate, Sookie is messing around at the height of the battle with Arlene, pulling able-bodied fighters away to tend the wounded while the chances are still extremely high that they will all die. Sing along with me everyone– DUMB, DUMB, DUMB! I should have titled this Sookie Plays It Stupid, but somehow she made it out alive again, and the angry villagers didn’t. Silly me. 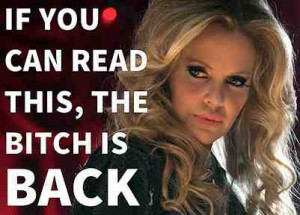 Pam has been all gushy, sentimental and crying constantly for I don’t know how long now. I mean, they literally had her blubbering during long walks on the beach in some kind of tampon commercial spoof. It was horrible. When they landed in Shreveport it was like she got her real personality back! I know because she’s all cranky and she’s sick of Sookie’s special fairy vagina, like the good old days. “She’s like a fucking fungus that just won’t go away!” *sniffle* That’s my girl!

I’m not even wasting a section on Bill. He may not be an asshole anymore, but he’ll always be a summer’s eve canoe. I do need to discuss the wig they have on 80’s Eric– it’s horrible. Not as bad as Marvin last year, but painfully obvious nonetheless. Still, when he came out of the back room to meet Ginger, it was that Breathless Sparklepire Eric™. *sigh* He plays awesome in the current timeline, but he’s sick. :-( It’s the little things, like having to put his head between his knees during a fight and not being able to punch a hole in concrete– those everyday things you take for granted that get to you the most. It was good to see him eating again after the blowout at Fangtasia was over. He needs to save his strength to last long enough to go after Sarah Newlin– but he’ll have to get her before those ninjas from Episode 3 do.

Oh I just had a thought– What if fairies aren’t the cure to Hep V? What if Sarah Newlin is and Eric kills her before the ninjas can get it? I should get back on my meds right about now…

Don’t forget to leave your thoughts in the comments– and check out the sneak peek at next week’s episode.