Is it just me, or is Season 7 of True Blood just really bad? I know that I probably said the same about Season 6 and several other Seasons as well, but the show that has been silly for years, just feels pointless in its final season. Call me an eternal optimist, but I had been holding onto really high hopes that somehow, they would pull it out for the fans in Season 7. That’s not to say there haven’t been some good moments, but they seem so few and far between. For a look at both the good and the bad things, read on. There will be spoilers, obviously, so if you haven’t watched “Fire in the Hole” yet, you’ve been warned. 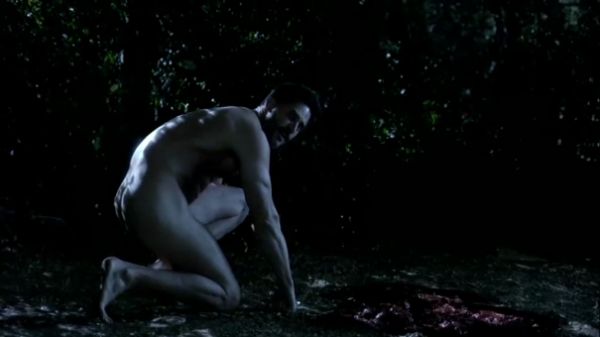 Of course we’ve got to start with Alcide, as his shocking death is what’s got everyone talking today. But was it really a shock? I don’t actually think so. With the exception of a whole lot of shots of him looking broody or scowling and stomping around angrily, he really hasn’t had anything to do on the series for far too long. The writers have sadly underutilized this character, never really giving him a chance to develop into anything more than eye candy. Maybe I’m the only one out there who feels this way, but I would have liked to have seen Alcide do more than just look sexy. I really liked Joe Manganiello in the role, and I’ve found it really disappointing that they didn’t give him decent story lines.

Sookie’s reaction to the death of her boyfriend was… interesting. Just prior to the sad event, she’d confessed to Bill that she didn’t love Alcide as much as he loved her, to which a poker faced Bill answered that maybe, in time, her love would grow stronger. I’m pretty sure that inside, Bill was doing a victory dance, but he covered it well, playing the role of the sage adviser to perfection.  Although Sookie did shed a few tears, her overall calm spoke to a sense of relief, as she no longer needs to deal with the guilt she’d been feeling over not loving her man enough. Farewell, Alcide Herveaux, Sookie may be relieved that you’re gone, but your abs will never be forgotten! 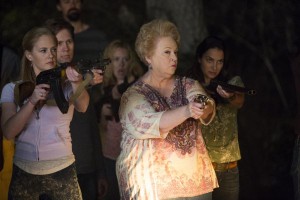 Perhaps the true shocker of the evening, and the character I’ll mourn deeply, is actually Maxine Fortenberry. I don’t think that I’m alone in my grief over the loss of one of the show’s few truly great (albeit annoying as hell) characters. In an ever changing world that is full of chaos, we could always count on Maxine for a heaping helping of bigotry and a really unattractive outfit. There’s something to be said for consistency. I know that since Hoyt left town, she hasn’t had all that much to do, but any time she popped up on screen, we always knew what we were going to get, and Maxine was always good for a laugh. Farewell, Maxine, I’m sure there’s a special place in Hell for you. I’m picturing a Hell where everything is controlled by gay supernaturals, and where Wal-Mart is never open.

Speaking of Maxine’s death, is anyone else already bored with vigilante angle? It seems to me like that storyline is getting old, fast. Do the angry townsfolk exist solely to persecute poor Sam, who has absolutely no purpose anymore, whatsoever? He divides his time between trying to talk sense into his people, and running around in the woods, naked. Sadly, now that Alcide is gone, Sam will be the only one running around in the woods. As he’s one of the only decent people in Bon Temps, I was rooting for Sam to have a decent story line in the final season, but it seems that’s not to be. 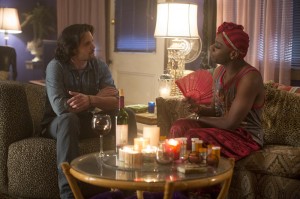 What’s not to love about Lafayette? He continues to charm the socks of of viewers everywhere, every single episode. As of this, the third episode of the season, his budding relationship with James is actually one of the only interesting things going on. James is feeling neglected by Jessica, Lafayette is self medicating to dull the pain of all he’s loved and lost. It seems perfectly natural that they would find comfort in each other. These two have a great chemistry and I’m excited to see how these two evolve together. New James is pretty likeable, and it wouldn’t it be nice to see Lala find happiness before the series comes to a close?

Meanwhile, Jessica is too busy babysitting Adilyn to notice that her man is growing so close to Lafayette. Joining forces with Andy Bellefleur, Jessica locates Adilyn and Wade, before heading over to Jason’s house to interrupt a lover’s quarrel between Jason and Violet. Coincidentally, when they set out to search for the vigilantes, they all end up in just the right place, at just the right time, to help Alcide and Sam bail out Sookie and Bill, as their plot to draw out the Hep-V vamps becomes complicated. With the Hep-V vamps, they also find Holly, who will, we presume, lead them to Fangtasia to rescue Arlene and whoever else is left in the basement. Does anyone really care about any of this? 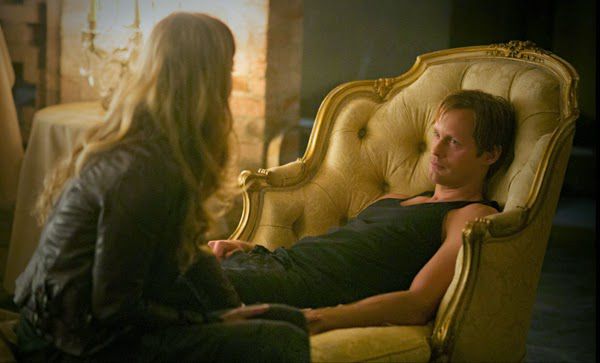 Let’s check in on Eric and Pam for a minute. These two are a couple of my favorite characters, and some of the strongest actors on the show, so I find it pretty surprising that I’ve been bored to tears every time either or both of them have been on screen in Season 7. Their chemistry hasn’t changed, however the writing is absolutely terrible, and that is a crime, considering the caliber of these two characters. Eric’s having been infected with Hep-V is sad, indeed. I sincerely hope that a cure is found, as our Viking deserves a far more valiant death than to get put down by the vamp virus.

On the subject of flashbacks, just, no. True Blood has not, in nearly seven seasons, ever done a successful flashback. So stop, already! Eric and Pam’s 80’s flashbacks were truly painful, from Eric’s hair, to the weird vintner’s daughter, to the Authority and the Japanese mob. Nothing worked here, even an unclothed Eric couldn’t distract us from the fact that this was really reaching. Oh and why spring Eric’s 1980’s human love, Sylvie, now? She, who suddenly seems as important as Nora or even Godric, despite the fact that we’ve never heard even a hint of a mention of her before. Why are the writers grasping at straws here? Surely there is a better way to weave the Authority and the True Blood henchmen into the fold. 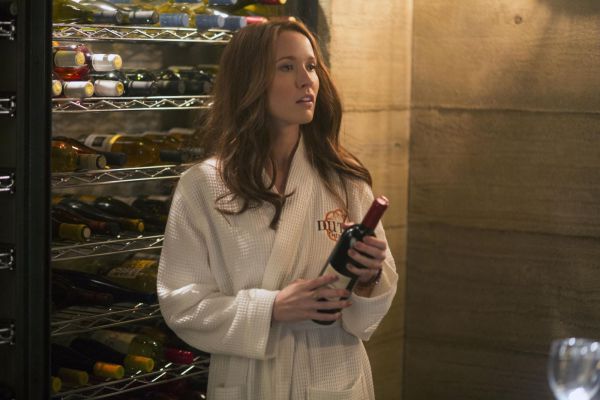 The transformation of Sarah Newlin is kind of fabulous. Ever true to character, she’s found a man who runs something and she’s latched on to try to get a piece of the pie. While her sex scene, which culminated with her climaxing in unison with the creepy Guru, was pretty gross, you have to give Sarah credit; she just never gives up. The arrival of the Japanese hit men reveals that they’re out to punish Sarah for her stiletto murder of Mrs Suzuki, and are just as determined as she is. I’ve never found any of the Newlin plots interesting before, but I have to admit that I’m curious to see how she weasels her way out of her current situation, and hopeful that Eric and Pam find her before the True Blood Mafia does. 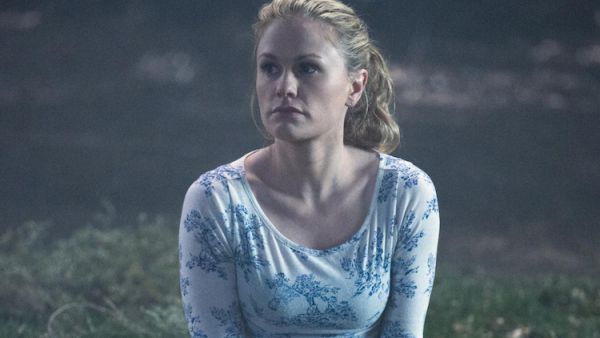 “Fire in the Hole” leaves us with a lot of questions unanswered, but the thing I’m most interested to see play out is whether or not Sookie will end up with Vampire Bill at the end of the series. Part of me hopes she will, as the last time I was really happy with the show as a whole was way back in Season 1, when Sookie and Bill were deeply in love, against all odds. Personally, I don’t want to see her end up with Eric (he’s too good for her!), and of course, Alcide is out of the picture. Sam was once a contender, but I don’t think he’s in the running anymore, as he’s just too busy running around in the woods to pursue a real relationship.

As bad as it is, I’m still looking forward to next week, as I’d really like to see some of our questions answered as the series comes to a close. Are you looking forward to seeing more, or have things gotten so bad that you’re dreading the next episode? Should Sookie end up with Bill, or is she simply so self centered that she’d be better off alone? Leave us a comment and let us know your thoughts on Season 7 so far, and what you predict for the next 7 episodes.

MJ Snow is an avian behavior specialist, animal activist, role player, blogger and writer.  A LONG time George RR Martin fangirl and Game of Thrones Addict, MJ spends way too much time in Westeros. MJ is the co-founder of The Snow Keep, a short story and fan-ficiton blog, and founder of  The Brothers Clegane, a Sandor & Gregor Clegane tribute blog. She also co-curates several other Game of Thrones themed blogs, as well as Empowering Animals, an Etsy shop which sells wristbands to raise funds for animal causes.