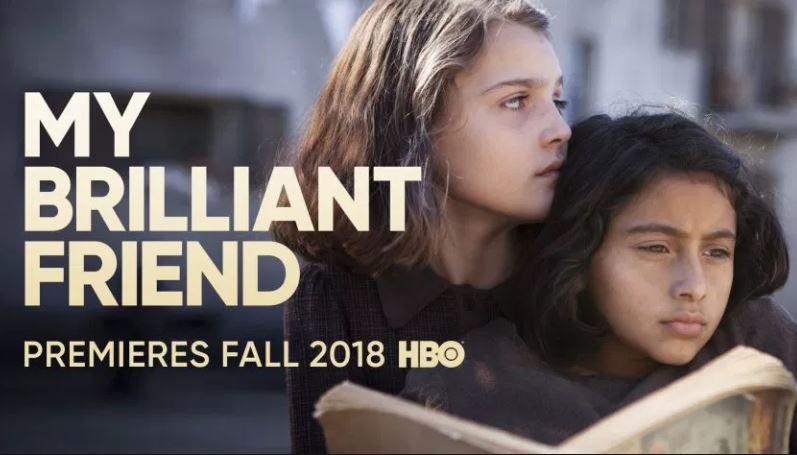 There seems to be growing buzz about the RAI/HBO co-production MY BRILLIANT FRIEND. We’ve remarked on it twice here. First, we announced the cinematic adaptation of the Elena Ferrante novel was a certainty back in March of ’17. We were able to get images in front of you in June of this year. Now that production is complete and ready for its HBO debut. A bit of detail about its premiere can be read in the press release below:

Filmed in Italian, the series is based on the bestselling book of the same name by Elena Ferrante. When the most important friend in her life seems to disappear without a trace, Elena Greco, an elderly woman living in a house crammed with books, switches on her PC and starts writing her own story, and that of Lila. She tells the tale of their friendship, which started at school in the 1950s. Set in a dangerous but fascinating Naples, it is just the start of a story spanning 60 years of life. A tale that attempts to unveil the mystery of Lila, Elena’s brilliant friend. Her best friend, and her worst enemy.

MY BRILLIANT FRIEND is an HBO-RAI Fiction and TIMVISION series, based on the bestselling novel “My Brilliant Friend,” the first of the quadrilogy by Elena Ferrante published in the U.S. by Europa Editions; a Wildside-Fandango Production; produced by Lorenzo Mieli and Mario Gianani for Wildside and by Domenico Procacci for Fandango, in collaboration with RAI Fiction, TIMVISION and HBO Entertainment and in co-production with Umedia. All episodes are directed by Saverio Costanzo. The story and screenplays are by Elena Ferrante, Francesco Piccolo, Laura Paolucci and Saverio Costanzo. Paolo Sorrentino and Jennifer Schuur are the executive producers. Fremantle is the international distributor in association with RAI Com.

We hope you will not be turned off by the fact that this production is run with subtitles. It was filmed by Italians, with Italians speaking, you guessed it, Italian. So, unless you are fluent in that Romance Language, you will be reading along. But, if you think about it, subtitles are not an oddity at HBO. Foreign languages have been known to pop up from time to time in series and certainly if you watch HBO International programming, as I do, you read the show all the time. Shows have come our way form HBO Europe featuring Czech & Polish, HBO Asia offering us Japanese & Thai and HBO Latino with Portuguese & Spanish.

Those foreign productions can be found on the streaming sites, but MY BRILLIANT FRIEND is coming to the main HBO channel in November. It is to be a lush, epic and emotional story that will be of the quality HBO promotes and its audiences expect.