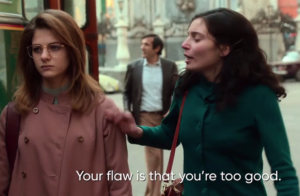 We come back this episode with Elena’s (Margherita Mazzucco) former professor Mrs. Galiani (Clotilde Sabatino) requesting a visit from her, but to bring Lila (Gaia Girace) along as well. Lila isn’t really sure why she’s wanted but she goes anyway, and boy doesn’t that burn Lenu’s buns. Elena is desperate to fit in with these intellectuals and elites. She wants to separate herself from the neighborhood she came from. Lila doesn’t have that problem. She’s back living there and getting into the thick of it. They also see Pasquale (Eduardo Scarpetta) and Nadia (Giorgia Gargano), clearly together given the state of dress. I’m glad for Lila to leave the factory behind especially as the situation escalates. The interaction brief and the conversation tense, Lenu leaves with a bitter taste in her mouth admitting in the voiceover she would not see Lila again for years. 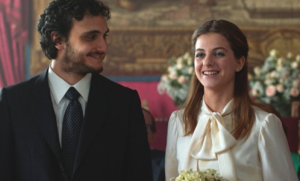 Next is Elena’s wedding. Though Lenu doesn’t have the best start to her day arguing with the groom. Look, being who I am I’m always going to agree with Lenu in this argument. A woman should have control over her body including when or if she gets pregnant. He wants her to write another book. Do you truly believe that will happen easily when she’s pregnant and then with a newborn? Just, truly, are you that dense to not understand the full weight of what a woman deals with post-partum on top of all your other societal expectations? Naïve? No, just fucking annoying. Unsurprisingly, Elena gets pregnant, has no success writing a book, and sinks into post-partum depression. I already didn’t have a high opinion of Pietro (Matteo Cecchi) but to close your office door on your depressed wife and screaming child…do not pass GO, and go directly to hell, sir. Everything Elena’s said is true. You don’t want a wife. You want a loyal housemaid. 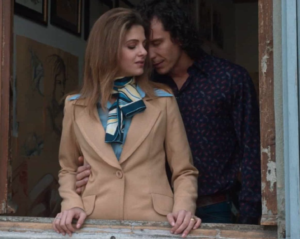 She does have very different views than Lila about pregnancy and I’m not surprised in the slightest. Particularly given the conditions under which Lila became pregnant, I’m not surprised she would harbor some annoyance towards the process of creating a child. Lenu’s circumstances were a bit kinder and naturally a more happy attitude towards the whole notion. Pietro did press sex though too. “Is there a problem?” Well yes, douche canoe. Does she look in the mood to you? She definitely doesn’t find his company much to be desired. Though she flirts a dangerous line. I’ll admit, I was kind of hoping she would cross it. Instead, a second daughter graces her life. 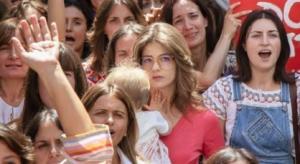 The episode is aptly named for I too would experience terror if I was a small child lost in the middle of a march and assembly. While I can definitely get behind the message, you should take better watch of your kids Lenu if you’re going to bring them to something like this. Pietro wasn’t pleased. Not surprised. Violence is rising in Italy though and he’s got a fair point to be careful. The neighborhood is steeped in murders from both the fascists and communists. But he thinks she’s losing herself in this new ideology. Might I posture, rather than losing herself, she’s finding herself. Elena has some truly fantastic lines in this show and throws down some boundaries for Pietro.

But speaking of the violence back home, Gino (Ricardo Palmieri) has been killed in his pharmacy by the communists. Carmela (Francesca Pezzella), Pasquale’s sister, calls Lenu saying the police think he’s connected. She also mentioned not trusting the cops because there’s no difference between them and fascists and whew, thank for you for that tea. She drops that he had asked for Elena’s information so we’ll see where that leads. Lenu checks in with Lila who is shockingly chill about the whole situation and keeping her nose well out of it. I suppose she’s got big things she’s dealing with right now, but I expected a little bit more concern. She asks that her son Gennaro come stay for the summer. Nothing to do to keep him out of trouble and she’s busy working. Elena agrees but it’s clear there is more going on. 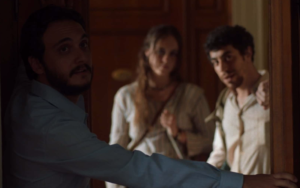 Ding dong, who should arrive? I’m not sure what those two have been up to but that was one of the most tense situations ever. She seems high and he seems almost dazed. Or even potentially slightly menacing? Elena provides all hospitality to two rude and awkward guests. I’ll admit, Pasquale does have a point about working people. If they disappeared so would most everything else. Unless the elitist class can adapt. Elena’s point to Pietro is returned with a slap, once the guests have left of course. For as much as she wants to fit with the elitists, Lenu is still a neighborhood girl at heart. She saw everyone around her working and working and working for what little they got. She lucked out. Not to mention she’s right and Pietro can’t stand it. 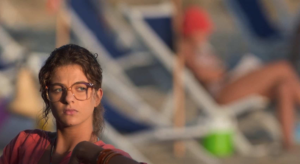 Eventually, Enzo (Giovanni Buselli) arrives with Gennaro and while he’s pretty persistent that nothing happened, he eventually gives up. Having anyone fascist dip into your life would be scary enough, of course Lila would send her kid away with Michele Solara (Alessio Gallo) sniffing around. You know, I bet he’s probably the nicest guy in real life, but my god in this show can he do menacing. He is constantly giving me the weebie-jeebies. Lila and Enzo have a nice setup at IBM and Michele wants to interfere in his own way. Not to mention, he’s gotten his mistress pregnant again. Marisa, Nino Sarratore’s (Francesco Serpico) sister, who just so happens to be married to Lila’s brother who is gay. So there’s just a lot going on and yeah, maybe Gennaro should leave for a bit. Elena takes them to the beach for vacation, and whew what a trip. I’m not surprised the factory owner would meet an untimely end, but that was quite something. The foreshadowing builds up in this episode for next season if you know anything about the books. Elena arrives at the perfect time, though I’m sure her daughter will likely suffer some emotional damage. Meanwhile, Elena herself is seeing ghosts.