Back in March of ’17 we announced that a limited series going by the name of SHIBDEN HALL was in development. We have heard news about progress on that project. It is now titled GENTLEMAN JACK. 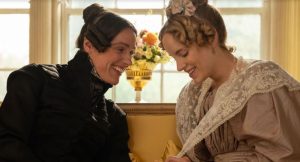 Shibden Hall is the ancestral home of Anne Lister in Halifax, Nova Scotia. The story, as further defined via the link above tells us that Lister would go to any lengths to save her birthplace from ruin. That included marrying wealthy. The twist is that she was out to marry wealthy heiress Ann Walker and in doing so shocking the citizenry. She became known as Gentleman Jack. It is a Lookout Point production for the BBC and co-produced with HBO. It is still slated as a limited dramatic series likely to be presented in the U. K. before appearing in American audiences on HBO.

Starring as the lead, Gentleman Jack aka Anne Lister, is British actress Suranne Jones. She has appeared on many a U. K. series including her latest, Doctor Foster but was also in HBO’s 2010 miniseries FIVE DAYS. Seen here is a picture from the set of GENTLEMAN JACK with Jones the one on the left. 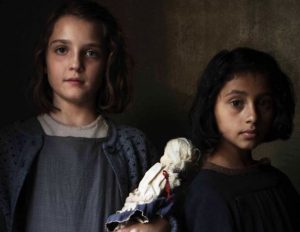 The other joint production in the works, MY BRILLIANT FRIEND, was first mentioned here also around the same time. As noted the series tells the story of Elena Greco, an elderly woman whose lifelong friend Raffaella Cerullo seems to have disappeared without a trace. Elena begins to write the story of their friendship, which began at school in 1950 and would continue for more than 60 years. The pictures here show the friends as their younger and older selves. 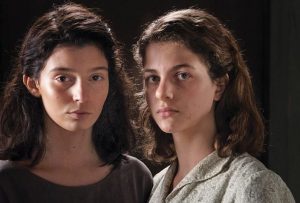 This production has been filming across Italy and we wait for it and GENTLEMAN JACK to appear on HBO sometime late this year or into 2019.