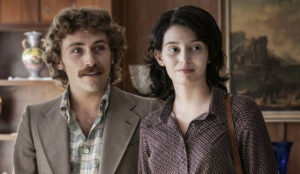 The summer isn’t even over and the children’s constant bickering is starting to get to Elena (Margherita Mazzucco). Pietro (Matteo Cecchi) just cannot handle it at this point anymore. Meanwhile, Lenu is cleaning up broken glass and dealing with petty calls from Lila (Gaia Girace). Listen, great that you’re making much better money now, but your friend is watching your child for you for what seems no charge or expenditure and you’re calling to brag about your new deal with the Solaras? Either come get your annoying ass kid or shut up. In the end, is it a surprise? Given their past interactions including the shoe store, I would imagine Lila feels like she can handle this. Whether she can or not is up for debate.

Elena rolls back into the neighborhood for a child delivery and is charmingly greeted by Enzo (Giovanni Buselli). He slips up so Elena knows something’s afoot but there’s all sorts to process. Elena’s sister Elisa (Francesca Montuori) is engaged but also shacking up with Marcello Solara (Elvis Esposito). Unsurprisingly, Elena isn’t thrilled but she loves her sister. I appreciated the commentary about her mother’s hypocrisy. Calling Lenu a slut for doing the same but once you’re reaping benefits it’s fine shack up all you want. Ding dong, surprise! It’s the most awkward lunch you could imagine! Shove everyone to a table and watch the sparks fly. There was Antonio’s (Christian Giroso) beautiful gift to Lenu though he wasn’t in attendance, then also Gigliola’s (Rosaria Langellotto) awkward comments and overall behavior, plus Michele’s (Alessio Gallo) creep factor vibe towards Lila, it was quite a lunch. Add some booze, music, and dancing though and it’ll mellow out. In the end, Pietro sizes everyone up and gives Elena his opinions. In some instances, she agrees but others, not so much. Lenu dreams some terrible dreams that night and goes to visit the new business the next day. Her ghosts are getting intense.

We open this episode in Pietro’s class with a rather harsh student encounter. He wants to report it but Lenu thinks it’s just a joke or stress. Sorry, rather have to disagree there, Elena. A student pulled a gun on him. That’s hugely not okay. At least it wasn’t what Franco (Bruno Orlando) or Silvia (Maria Vittoria Dallasta) went through. Franco goes to recover at Pietro’s sister Maria Rosa’s (Giulia Mazzarino) place. What little web all these characters weave. Elena goes to visit but he refuses at first. He’s humiliated but also grieving. He lost an eye. The way his world functions just changed drastically. 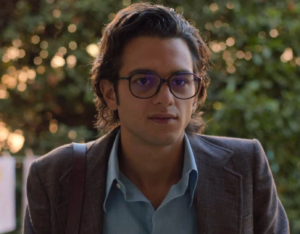 Plus Nino (Francesco Serpico) reappears and not only is he great with the children, he puts Pietro in his place regarding giving Elena time to write. I’m sure she appreciates the effort but rather easy for you to say, Nino, while you’re in someone else’s house. What’s your wife dealing with at home? Speaking of which he’d like to return with both his wife and son. My god, Elena, I thought this was supposed to be a secret? Asking for advice picking your outfit, strutting them in front of him, it’s so blatant how you feel about him. Not to mention, Nino’s poor wife who has no idea. She trusts you, Elena. What a fool she is.