In episode two, we open on Pietro (Matteo Cecchi) finally meeting his future in-laws and officially asking for Elena’s (Margherita Mazzucco) hand in marriage. Of course, Mama (Annarita Vitolo) has to have her say regarding the lack of church involvement. First, super proud of Pietro for standing up for himself especially because I agree with him. But also, Italian mamas seem pretty intimidating. Second, his speech about loving Lenu was so lovely. I appreciate that Immacolata actually said out loud that she’s proud of her daughter. And in front of other people! However, Lenu’s brain is feeling differently about this moment and that seems pretty foreboding for their marriage to come.

After Pietro has departed, Pasquale (Eduardo Scarpetta) and Enzo (Giovanni Buselli) come to get her for Lila (Gaia Girace) who has fallen ill. She’s clearly not herself so they get the only person they can. The only person Lila wants. Before divulging anything of life, Lila needs some solemn promises from Lenu. I understand her fear especially knowing who is involved, but she needs to insure Gennaro (Giuseppe Cortese) will be taken care of. Once that’s settled she tells Lenu everything.

She’s working at a sausage making factory, the one now owned by Bruno (Francesco Russo) who we met in season two. He was vacationing with Nino (Francesco Serpico) and if I recall correctly, he was kind of douchey and sus so makes sense the business he runs would seem the same. Look, you got landed responsibilities you don’t understand, I get it. But let’s not support a work environment based on sexual harassment. Maybe let’s just not. But for now anyway, that’s Lila’s setting, being worked to the bone and groped too. After a while of that, your body is going to react in certain ways. 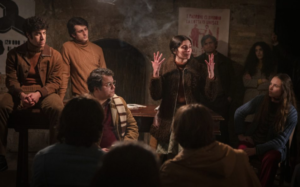 Politically, it’s become the fascists versus the communists. Well, I know which side I’m on, comrade. But the factory is becoming a tipping point. Lila is living with Enzo, though only as friends. “Being near him calmed her,” yep girl, know that feeling. They both go to a communist meeting wherein Lila is roped into giving a speech.  Quite a speech, if you ask me and she’s completely spot-on. What do any of these academics know of the working class? She respects Pasquale because he’s from the neighborhood and she knows he’s put in the time. But these professor’s kids and elites, what do they know of real working class struggles? If she makes a fuss she loses her job and then she can’t feed her kid. She has someone dependent on her, and I appreciate they say they’re willing to support her but I have to believe if she truly showed up on Nadia’s (Giorgia Gargano) doorstep with some suitcases carrying all her and her son’s worldly belongings that Nadia would be a little annoyed at the inconvenience.

Back at the factory, Lila is ready to put her foot down and once she does she sees how far the whole factory has stepped in it. Michele Solara (Alessio Gallo) emerges from the shadows and what a puppet master he seems to be. There’s one puppet he can’t have though and when she leaves, revealing her red sweater, she knows the danger she’s now putting herself in. But everything inside her is breaking, and what will it take to put it all back together?

Episode three follows up immediately, with Lenu leaving a sleeping Lila. Pasquale challenges the situation and Lenu puts her foot down. First of all, there are plenty of people who could get involved to help this fight. Lila doesn’t need to completely sacrifice her body and her life for the cause. Second, she’s clearly ill so what’s to be gained? I mean really, how much more do you think she should sacrifice because I think she’s done enough. Lenu wants to help and gets access to a newspaper. Since she’s a big fancy writer now, that’s her best way to help. She publishes a scathing piece using Lila’s own quotes, who isn’t thrilled. Lenu has the words, but Lila has the voice. They need both.

Lila’s also not thrilled Lenu is dragging her to doctors to get checked out. She’s worn out from her brain to her feet. There’s bound to be complications that come with that, but Lila has other motivations. She wants the pill, which at that time was only available to married women to regulate their cycle. Well, isn’t that difficult for them both given their situations. I did appreciate that Lila revealed she had read Lenu’s book. I figured she would but given their often at odds nature in the past, you never really know. But she’s onto Lenu and their whole conversation regarding sex was peak female friendship. Sometimes, you don’t really know the full details of a friend’s sex life and you just get little hints. And now Lila knows Lenu has plenty of her own experience. 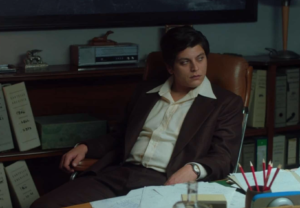 Especially with this new control, Lila is a different person. She’s smiling and upbeat. She actually has a positive outlook on her life because she has some control over it. Lila wants to move back to the neighborhood with Enzo, even if she knows it will be rough. Lenu goes to see how rough and sees the Solara’s have their own things to worry about like Michele’s wedding to Gigliola (Rosario Langellotto) and Lila’s younger brother preparing to marry into the Solara family though he and Lila have carried his secret. Okay, listen. I always suspected but gosh, to see him admit it to Lenu was a sad, yet tender moment. But also for her not to know proves even their friendship had boundaries Lila wouldn’t cross. So she has to be asking herself now if there are other things she wasn’t told? She goes to visit Gigi in her fancy lodgings. I knew how it would all go, so should we all. Of course she’s going to tout how amazing her place is. She’s on top of the world! Except of course she actually isn’t. She’s with a man who doesn’t love her, who clearly has fucked plenty of women as he pleases, but only truly loves one woman. Can you guess who? So he obviously treats her like shit, just like almost all the other men. Look at how Stefano (Giovanni Amura) turned out and we were hopeful there at first.

But Lila is back in the neighborhood and ready to start fresh. Lenu got Enzo a hook-up with a computer gig. So he’s on the track to doing better for everyone. They’ve removed themselves from the center of the fascist/communist showdown though who knows how that will spill over considering the Solara’s involvement. But most importantly, one comparison of her Gennaro to Ada’s (Ulrike Migliaresi) daughter proves to her who her baby daddy is and lawd, aren’t we all grateful. Well, I certainly am. Lila is too even if some of the reunions seem sour. I hope this change goes well for them. I really want to see a future for Lila and Enzo where they can be happy together.