I have utterly adored reviewing this series and am ecstatic we’re back for another season. I remember hearing about productions shutting down in Italy with the pandemic so I knew this show would take some time. I’m just so glad it’s back and can’t wait to check in with our brilliant friends. 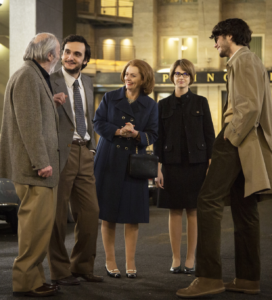 We start with Elena (Margherita Mazzucco) who is now a published writer. I’ll admit, I think it might have gone to her head a little bit. I think she expects more people to be amazed by it. Girl, I’m a published novelist and have sold like 5 copies. I’m not whining about it. You’re doing okay. But not enough to amaze Nino Sarratore (Francesco Serpico) which is the real goal. I wish you could move on from him. You were never his choice so why is this such an issue? You have a fiancé who has tenure, you’re doing fine. But you can see the pain in her face when he asks her about Lila (Gaia Girace). And I get the sense the girls aren’t actively in touch at the moment.

Lenu’s still at home shoved in that tiny apartment with her grown ass brothers and ill-tempered mother (Annarita Vitolo). Mom, I get you’re not thrilled she’s having a courthouse wedding but also you’re not paying for jack squat of it so I don’t think you have room to talk. Let alone threaten with a fucking knife. Mama, chill. But I did vastly appreciate the final acknowledgement of their general displeasure for each other. It was a very adult moment from Lenu, who is often rather childish in my opinion.

Reviews for her book are rolling in and with her mad dash to the papers, we see the year is 1968. Elena gets some positive reviews, inflating her ego just a tad more. But not every review is kind. Donato Sarratore (Emanuele Valenti) says her work should be banned and since you raped her we’re just gonna ignore your bitter little voice and move on. Nino really didn’t fall far from the tree of shittiness, did he? But she has hurt feelings. Unfortunately, that’s what you get when you put yourself in the public eye. 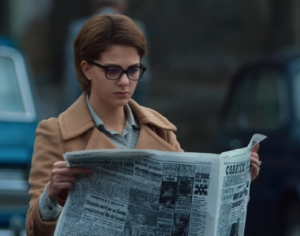 She decides to flee the neighborhood for greener pastures. Visiting a university, she sees her friend and soon to be sister in law as well as an old beau, Franco Mari (Bruno Orlando). There’s some flirtatious looks, but still Lenu with needing to prove something. She needs him to be amazed with her work, and he just isn’t. He has some critiques and she just can’t fathom listening to it while also pushing him to spit it out. She still hangs out with the group, and nearly gets raped again. Ugh, men. She takes kindly to the girl with the baby which I thought was sweet. The mother was clearly overwhelmed and looked desperate. Why am I not surprised the deadbeat father is Nino? Genuinely. For someone who absolutely despises his father, you’re turning out quite a lot like him. I cannot wait for what’s ahead, especially checking in with Lila and what her life has been. I haven’t read the books but after doing a little bit of internet research, I know some of what’s to come and I cannot wait.