Here we go with another look at LOS ESPOOKYS as the team take on a haunted mansion scenario. Even the opening character, an invited quest, knows the deal and so do you because it is an old horror trope plus, she explains it to you right at the beginning. Guests are invited to spend the night at a secluded mansion and the one who survives the night gets to inherit a fortune. Yay! Pulling off the ploy, of course, is Renaldo, Andres, Ursula and Tati – Los Espookys.

The team may be hanging out in Renaldo’s house with his mother and younger sister but when it is time to talk business they head to the office – an old playhouse in the back yard. There they talk about the mansion gig and the stunts they need to pull off. But, smartly, the show isn’t all about the business we get a taste of the team’s personal life, if they have one, as well. Ursula has her dental assistant job which she now seems unfocused at because of the new job and Andres also struggles to balance the Espookys venture and his place in the chocolate empire with his lover. What to do? 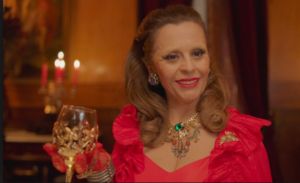 The night of the job arrives. A lady only known as the Mysterious Woman (pictured) is the client for the Inheritance Scare or should that read ‘Scam’ and she adds a last-minute request. Whatever the results of the night just make sure the deceased’s son is not the elected heir. So how do they pull it off? Well not without a hitch or two as they incorporate a scary butler, a head on a platter and a weeping portrait but it isn’t scaring anyone. Can they pull off the gig? Of course, they can with a little inspiration and the perfect scare tactic. Just what that is can only be revealed watching the episode, quirky twists and all. Oh, plus there is Uncle Tico in an unrelated set of scenes.