We could create quite a list of content that has been removed from HBO Max and from the specific HBO library right about now. We add to that list LOS ESPOOKYS and BACK ON THE RECORD WITH BOB COSTAS. These are two shows under the HBO banner that by all appearances were doing okay, but then, we weren’t privy to their numbers.

This common practice as of late has been for a number of reasons. Some shows got the ax because the company is paying closer attention to the numbers. If a show is just too expensive for WBD’s wallet it could be targeted. If the series, no matter how well it was critically received or not, got low viewership numbers it could be targeted. They are watching how often each title is getting clicked on in the library. Talents do get residual pay for their work airing. Another reason, that most recently surfaced, is WBD’s desire to shop out titles to other outlets. That supposedly is the rationale behind the loss of RAISED BY WOLVES and WESTWORLD. These titles were no longer strongly viewed on HBO Max so just sell the leftovers somewhere else. They’d rather have a little bit of money for the weaker shows and more bandwidth for the next dozen property renovation shows. The last reason is that the production team decided to make the call to fold. 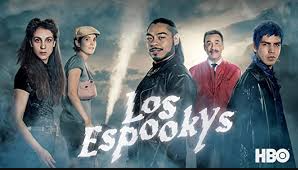 So, for what reason did the two titles mentioned above get the ax? Well, for the Latino horror-comedy LOS ESPOOKYS it appears to be for two reasons. It was no fault of the series that its momentum between its first and second seasons got split up by the pandemic. Season One was in 2019 and Season Two was not until 2022 and within that gap, the show lost an audience that never rebounded as the sophomore season played out. So, it was the dwindling in numbers that was a strike against it. If you care for the numbers round 1 averaged 156,000 viewers; at the start of round 2 two years later it was 114,00 with the back of the second season not ranking even that many. So, it was dropping off. 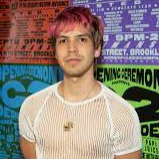 But the blame for the cancellation was spun out as a more positive reason than that. One of the key executive producers and stars (no, not Fred Armisen) of LOS ESPOOKYS, Julio Torres, has a first-look deal with HBO and so other projects were pulling him away as he evolves creatively. Okay? But then if that seemed to be the plan of the production team, to halt the series, why plant a small cliffhanger, that will now never get resolved, at the end of the season? What is the secret mystery contained in Tati’s purse?

Either way, the show, after just two seasons, is shuttered and HBO had the following statement: “We thank Julio, Ana, and Fred for this imaginative and delightfully bizarre world they created.  We are not currently planning on a third season, but we would welcome the opportunity to work with this cast and crew in the future.” that remains to be seen, but look for more from Torres perhaps. 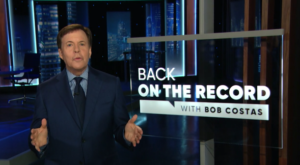 The reasoning behind letting go of BACK ON THE RECORD WITH BOB COSTAS isn’t as clear. Of the multiple sites I went to not one cited the numbers the show garnered. This show, the third for Costas at HBO over the years, just goes to show that established and acclaimed series (all of his HBO shows were nominated or won Sports Emmys) are safe. Bill Maher better watch out (I think I’m repeating myself). So, was sports commentary just too heavy for WBD? Was there not enough room for REAL SPORTS WITH BRYANT GUMBEL and Costas? That’s stupid because they are two totally different shows with different formats. Or did WBD feel that it had to choose between Costas and GAME THEORY WITH BOMANI JONES? That show, by the way, debuts its second season this month. Or,

and this is just covering all the options, there is no indication of the following, did Bob Costas just feel that the current iteration of HBO was just something he didn’t want to be a part of and this was him bowing out without citing that as the reason? Costas stated, “I have always been proud of my association with HBO, and the type of programming we have been able to do over the years. I am grateful for the invaluable contributions of my many talented HBO colleagues past and present, and to Ross Greenburg, Rick Bernstein, and most recently, Nina Rosenstein for their support and for the opportunity to be part of a network that has long been the gold standard.”  Perhaps it is no longer the gold standard. Whatever the reason, BACK ON THE RECORD WITH BOB COSTAS is out.

In the end, we know that cancellations are a part of the business but you’ve had far more than your share. WBD – ease up a bit.