All the episodes in this premiere season have been titled for the horror gig the Espookys team has been hired to pull off. This episode is no different but their job definitely takes a back seat to what is going on in the team’s personal lives in this one.

The focus for Renaldo and friends is to get a work visa in order to legally get to the U. S. to work on the movie Uncle Tico has procured for them. If you recall he is helping Bianca Nova (Carol Kane) to write the script about a werewolf parking valet. Well, the team can’t get the visa from the ambassador because she is in the mirror world and the mirror was smashed, right? So, they hope to raise enough money to bribe the dim-witted embassy staff to get it.

It seems a scientist really wants to impress federal officials when they stop by the lab so that funding would increase and she hatches an idea that she is studying and communicating with green aliens and the team fulfill those roles, though their hearts aren’t really in it because of their personal issues. Like I said they take 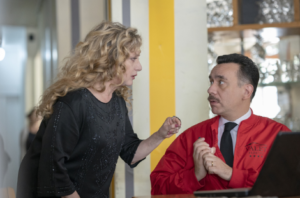 the forefront. Andrés is still dealing with the demon within him who has an unusual request before it explains anything to him including his true parentage all the while still debating on whether to marry Juan Carlos. His adopted parents force his hand by bribing him to go through with the nuptials or it is the end of his reign as Prince Chocolat’. Tati and Ursula are still battling the Heirbalife scheme and in fact, it escalates to physical danger when the CEO threatens Tati at knifepoint.

Only one dilemma gets resolved fully by episode’s end and that is that Melanie, the ambassador, gets out of the mirror world, though her reflection joins her. Her staff glues the mirror back together. So then by episode’s end, Renaldo is the only one without a crisis. He has the work visa and ready for L. A. His team, however, won’t go along because of their problems and besides they don’t what to work on what they think is a crummy script. Hah, like their little gigs haven’t been? Well, one more episode to go to see how it all works out.