Well, enough people must have taken a peek at the Friday night offering of LOS ESPOOKYS because the series has been renewed for a second season. The Espookys are the team of horror fans who have turned their make-up and FX skills into a fun, yet odd business in the unknown South American country from which they hail. They are led by Bernardo Velasco who stars as Renaldo. Cassandra Ciangherotti plays Ursula, a calm and collected dental assistant who provides teeth for the group’s monsters. Ana Fabrega stars as Tati, Ursula’s sister and the team’s test dummy. Julio Torres plays Andres, Renaldo’s best friend, a dark and mysterious heir to a chocolate empire.

All six episodes of Season One have aired (HBOWatch reviewed the season) and it proved quite unique and fun. They helped a seaside village get tourism flowing by staging a sea monster sighting; created an effective haunted house and made an appearance as green-toned aliens. Also appearing was show executive 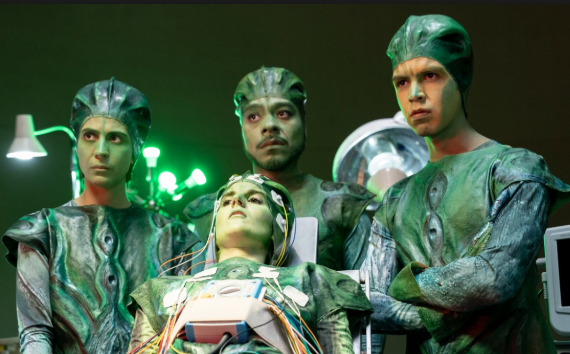 producer Fred Armisen as Renaldo’s Uncle Tico and guest Carol Kane as a befuddled film director. The episodes not only showed the team running their business but also getting tangled up in personal problems impeding on their life & work. Tati, for one, was out to find her Prince.

It is too early to say what plot will entail in Season Two except there was an open storyline regarding Ursula being stalked in the conclusion of the premiere season. Does the show like & fit into its Friday night slot or will it move to Sunday or Monday? Will Armisen perhaps play a bigger role in the series now that it as a following large enough to warrant its renewal?

So, if you haven’t seen LOS ESPOOKYS and want something off-beat from HBO’s normal fare catch the series on HBONow/Go and also seek out Julio Torres’ equally unique stand-up gig (MY FAVORITE SHAPES debuting on 08.10).