I came across this show back in 2019 because I follow HBO International content. As a result, I am pissed that WBD has terminated some of those associations but happy that HBO Latin America is still in operation. I never thought at the time I reviewed this little series back then that it would thrive. So, I guess that means I have to look at Season 2 in 2022. Here we go.

First, the company of Espookys is all present and accounted for. There is the boss, Renaldo; best friend Andrés; the most resourceful Úrsula, and her younger sister, dimwitted Tati. Perhaps this little recap will help –

In the season opener we see that they are up to their usual antics. They are hired by a client to create a fakeness of “My Hips Don’t Lie” singer Shakira and, of course, Tati is placed in that role. Whatever gig they can get, I guess. But time has seemed to pass since we last saw them. For starters, Tati is now married to the boyfriend she snagged in S1 and Andrés is no longer a chocolate czar heir. “Gasp,” you mean Andrés is now a commoner? As for Renaldo, it seems a ghost has latched onto him. I’ll explain in a bit. As for Úrsula, however, she is still being followed and now harassed with phone calls in a plotline carried over from S1. Perhaps, all this should come to light in this season. 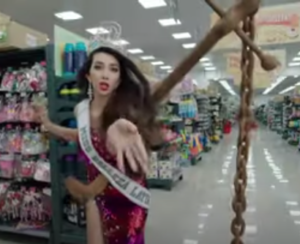 Back to that ghost. The premiere opens at a beauty pageant and the death of a contestant when a ship anchor ‘transects’ her, to use their terminology. It latches onto Renaldo while he is grocery shopping with his family. It is a funny scene as Andrés, who has never been to a grocery store before, marvels at the concept. Surely this season will be filled with moments like that and should also be filled with the problem of the ghost and why it attached to Renaldo and just how to get rid of it.

But there are things not quite right here. One is that Tati’s husband, Carlos, was to marry Andrés last season. So, Tati’s marriage is a sham because Carlos is gay. Úrsula points this out to her but Tati wants none of what her sister is dishing out. Also askew, and to our benefit certainly, is that Uncle Tito (Fred Armisen) is losing his job as a parking valet in LA. The season trailer alluded to what’s next for him. And as good as he is at his craft, Renaldo has to seek advice at a party to what to do about the ghost now in his life. But what we wait for every episode is the Espookys’ next case.

And that case is a winner. Oliver Twix is the groundkeeper at a cemetery, but he buries bodies wherever he wants and that causes problems for families, police and the city. He calls the Espooky team to halt the harassment, as he sees it.

What they do at the graveyard proves the real fun of this series. However, their particular problems still exist. Oh, where to begin? Tati fails to see the joke that is her marriage; Úrsula, is lured into another scam, though it will surely lead to who has been tracking her. Yes, an attempt has been made to brainwash her! Plus, Andrés is clueless in how to fit into everyday society and Renaldo is well, haunted.

And the season is off and running in all its surreal looniness. Find LOS ESPOOKYS Friday nights at 11:00pm on HBO.