Okay, everyone seems to fit the normal parameters of being a human being on this show except Andrés (Julio Torres). At the end of the last episode, he encounters an alien or a demon. I seem to have read somewhere (and can’t find out where now) that perhaps the oddity was within Andrés himself. Thankfully, the first moment of Episode Four seems to make it all clear, though it is still weird. Yes, the parasitic demon is within him and willing to help him remember his past for a price. This is not the last of the demon I’m sure.

Also, in this episode, a recurring character pops up that we had no clue was going to be one. The U. S. ambassador to this unnamed country, a Miss Melanie Gibbons (Greta Titelman) reappears. Had I known she was a returning player I would have pointed out that she was one of the haunted house guests in Episode Two. She was not the last guest standing but she does become this episode’s client.

The Espookys team needs work visas in order to get to the U. S. to work with Bianca Nova (Carol Kane). Ambassador Gibbons is willing to grant them in exchange for a staged abduction. To her logic, if everyone thinks she has been abducted then she will be able to extend her vacation time and just come back a week later. So, Renaldo and friends set her up to be pulled into a cursed mirror; the team would actually secret her away and get paid with the visas. It is a perfect plan except 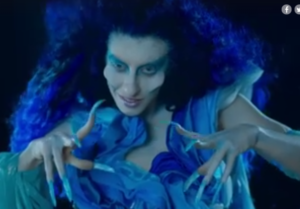 for one big thing, they actually obtain a real cursed mirror! Yes, this series goes there. Instead of it just being horror buffs pulling off a stunt this gimmick really works and Melanie G. has ended up trapped in a mirror realm and to top it off the mirror gets smashed. Will the team try to get her back? Will they get to work on their American movie?  Can they do it in the two episodes that are left?

This series has played up its quirky vibe effectively and offered some silly dialogue and goofball characters. Though Andrés may be a headscratcher right now Tati is a riot of laughs juxtaposed perfectly with Ursula’s more grounded style and Renaldo’s passion. Add nuggets of wit from Armisen and the quirkiness just builds. Who’d a thought you’d see that on HBO?