Back in July 2019, we told you that this oddball little series, LOS ESPOOKYS, was renewed for a second season. Of course, like everything else, the pandemic put a halt to the creation of that sophomore run. But we learn now, that production has actually concluded on the horror/comedy. Perhaps we’ll see it on the schedule in October just in time for Halloween or maybe sooner?

We found out about it via Bloody Disgusting, as there is nothing official from HBO as of yet. The series, which stars Bernardo Velasco as Renaldo, horror and gore enthusiast and leader of Los Espookys; Cassandra Ciangherotti as Úrsula, a friend of Renaldo’s who is the smart, resourceful, and more down-to-earth one; Ana Fabrega as Tati, summed up as the dim-witted test dummy who’ll do anything for the team and Julio Torres as Andrés, Renaldo’s best friend, the oddest of the bunch which could be due to the demon that haunts him.

Fred Armisen, who co-created the series with Torres and Fabrega, appears as Renaldo’s supportive Uncle Tico. This team & staff, like other productions, managed to find a way to create another season of their show safely and well under the radar when no one was looking. News dropped that production concluded due to a Tweet from Fabrega. 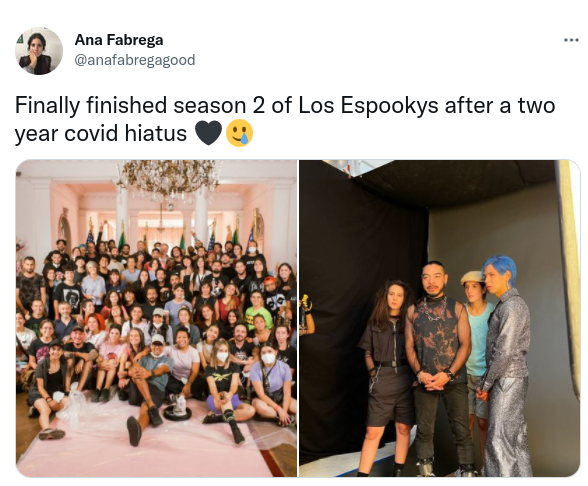 What will Season Two offer? Well, Andrés has had some haunting issues and gave into the demon in exchange for learning of his true parentage but where will this lead him? Tati is supposedly in love upon finding her Prince Charming and sound backing for the business and Ursula is being stalked, which is the biggest cliffhanger from Season One, all while Renaldo is energized to see his business thrive. He dodged a fiasco with Carol Kane’s wacked filmmaker and learned plenty of what not to do and how not to conduct himself on her film set; skills he can take with him. Is it on to bigger & better things in Season Two? Is LOS ESPOOKYS going to be a late-night summer treat or bide its time until Fall? We will have to wait and see. We’ll keep you informed.