After last week’s penultimate episode, whereby the rag tag team of Harper, Eric, Rishi and (almost inexplicably) DVD make the decision to pitch their collective talents elsewhere, the second season’s finale opens with their apparent return to Pierpoint, having failed in their arrogant quest. Where Eric thought his name would speak for itself initially, he soon becomes resigned to the fact that his time of pull has passed, and eventually and desperately leans on Harper in latter pitch meetings – her raw, new talent and her relationship with Jesse Bloom (again, the superb Jay Duplass). But after being on a cusp only to be derailed by Daria’s cameo stunting (see Season One), and any further interest being fuelled purely by their association with Bloom – who after Harper’s most recent stunt is drifting further and further away – the gang find themselves quietly slipping back onto the CPS desk with their tails between their legs. 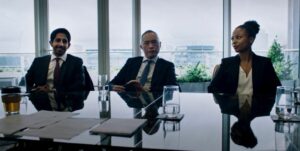 Harper, now prospectless, makes one final pitch to Bloom, in person, accepting of her mistake but not without considered advice, which is brushed off. What then transpires at pace for the latter three-quarters of the finale is compelling, if rushed.

Remember when Game of Thrones would spend literal seasons following characters as they ambled their way from A to B, only for the payoff to be quick and oddly unsatisfying given the quality of the effort put in by both show and viewer? It’s a similar story here, with every character and their interactions have been too well considered for the twists and turns of a show not yet renewed for a third season to then blaze through and conclude in a 45-minute window.

There are two examples here that illustrate this point.

Robert’s arc this season has been a subtle and appreciated one. He has contested sobriety and has been the victim of sexual and emotional abuse. At moments, he has had moments of weakness but has dealt considerably better than the version of his character portrayed in the first season. His newfound maturity has seen him have success on the desk, as well as in his relationships – namely with Yasmin which is still sensitively bubbling away beneath the surface. Ultimately, he winds up in a gasp-worthy position that is grossly unfair, that could see him potentially lose everything he has sacrificed for at Pierpoint, and even face jail time. This would have been a superb way to leave his character ahead of Season Three, however, showrunners Kay and Down, almost inexplicably (but hey, it’s their show) decide to marinate on this development only briefly, before tying up his story down a different, more freeing route altogether. Secondly, the eventual conclusion of Eric and (with Rishi and DVD’s help) Harper’s crusade to find a way out of Pierpoint is to see Adler – the most powerful man in the business – seemingly uninformedly and hurriedly bowing to a request blanketed in blackmail; a decision that for the sake of two employees and one client would reshape the entire structure of Pierpoint. It is so hastily pushed through considering the stakes that it makes zero literal sense.

Now, both of these examples could well be written off as a necessary tying off of plot and character in a way that concludes Industry, should it not be renewed, while leaving enough open to comfortably pick it up where it leaves off. However, speculating is much more interesting, especially if you are already a fan of the show. It is almost impossible to consider putting this into the blogging ether without referencing spoilers, but, where it is referenced that Bloom’s final play via Harper has been his genius plotting all along with her as his pawn on the trigger when you contemplate the fact that Eric’s sequence of effect could in fact have been in motion since his move upstairs, the resulting impact on Harper becomes easier to explain. Did he lie to her about Adler’s approval of terms in order to position the necessary move? Is she, ultimately, just too dangerous an asset to be an asset at all? Though at times, and especially in a cross-generational sense, it has veered closer to Skins territory than ever (apologies to US readers if that is a UK reference point that doesn’t land), Industry has delivered on the promise of a Covid-conscious second season. Where the first was a solid 8/10 from start to finish, season two has entire episodes that absolutely deliver at an eleven – Sorkin/Chandor level stuff. The moments of immature melodrama though, and on numerous occasions, do threaten to hold it back slightly even if it’s actually realistic that graduates in this environment would be this way susceptible, Thankfully and finally, it’s never in a way that makes it any less watchable while still bafflingly underappreciated.