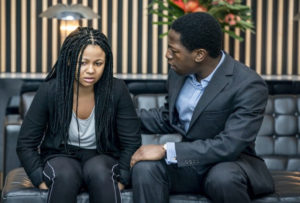 On first watch, the final episode of the first season of Industry may hit you as an anti-climax. Granted, there is no sex, and there are no drugs, which strikes as odd considering the volume of this type of content and how it has factored greatly into the relationships forged and broken between all of the main characters up to this point. But, today is Reduction In Force – the moment that the series has been building to since the opening frames of Lena Dunham’s pilot. It’s interesting that the last few episodes have featured the stakes at Pierpoint less and less, focusing almost exclusively on personal lives, only to drive the point home early doors in Episode 8. There were always going to be graduates who didn’t make the cut. This has been the one constant plot thread all along, though sometimes you did need reminding. 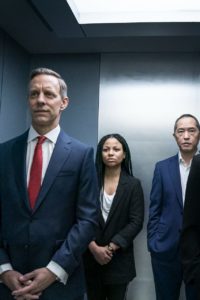 ‘Reduction In Force’ is on the nose, and brutal where it needs to be, but what it doesn’t come across as is realistic. Careers yay’d or nay’d via a live broadcast to the whole trading floor? Who’s to say? None of us are FX bankers. But, it seems unlikely. Sure, it’s dramatic that all eyes should be on Robert, Yasmin, Gus and Harper as they attempt to demonstrate their long term value to a room full of MDs, but the public nature of this potential humiliation verges on distracting. And, given how their presentations play out, the results are baffling. Is this really how permanent positions are decided in this sort of environment or did the ones who make the cut simply serve to support their return for a second season?

This surreal oddness aside, it is still a tense and cliffhanger-filled ending to what has been a truly astonishing ride. The episode does fantastically well in bringing your core four back down to earth, highlighting their variable immaturities across the board as they, one-by-one, pitch for their jobs to a room of people who couldn’t care less about what they’ve accomplished or what they’ve prepared. There are nosebleeds, panic attacks and everything in between, and somehow it’s the most qualified of all of them that doesn’t survive the day (in at least, a Pierpoint sense). What is learned is that existence at this bank is all to do with culture, and optics in the most extreme sense. It is a bleak social commentary that is relatable to a lot of sales-driven environments, and one that is starkly real, especially in a competitive economic climate, as portrayed in the not-to-distant past during which Industry is set. 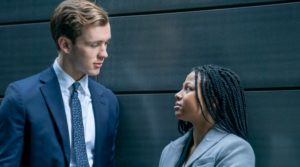 Pierpoint is about killing for survival, manipulating the system, and living lies to fit the narrative. There is nothing redeeming about this company or any of its people, and goddamn does is make for great television. Oh, and Ken Leung is back.