At it’s undeniable peak when wheeling and dealing either on the trading desks of Pierpoint or in the murky London shadows, Industry can be forgiven for taking it’s foot off the gas for a second to focus on reestablishing characters and developing relationships. There are still even emotionally charged moments of intensity in this week’s fourth episode, but they hardly hit the heights of the already expertly painted scenarios where there are dollars at stake. Kitchen Season does well to force Yasmin and Harper together in a way that insists upon a path to redemption being forged. Though Harper’s motives for travelling to Berlin are not mutual of Pierpoint’s she leans into her relationship with Eric to see it signed off in a scene that highlights exactly how disenchanted Eric really is in his new promotion that finds him very much off the desk. To take such a strong character away from the show’s prime environment seems counterproductive, so no doubt his experience and skillset will be called back into the fray at some point before season’s end. Once in Berlin, we discover that Harper, in fact, is acting on her hunch that her missing brother might be residing in the city.

Following her own family thread, Yasmin has managed to ensure that rather than the Pierpoint gals being put up in a Marriot, they are able to use her father’s property, in which she spent a lot of time growing up. In fact, upon arrival, it is almost untouched from the last time she was there. As a result, she begins to uncover further clues of her father’s sketchy history.

Both of these storylines are fine, and they allow the characters to stretch out and do more than get high and get laid, but you neverthless find yourself wondering how either of these strands are going to end up mattering to the bigger picture when all is said and done. 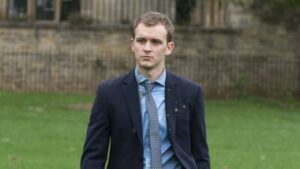 Back in England, Robert is finally given an episode in which to shine. Harry Lawtey is a terrific actor that brings a real complexity to a character that was initially easy to view as skindeep. In his secondment to Oxford by DVD to woo a soon to be graduate in Pierpoint’s direction, we are introduced thoroughly to his formative background before Pierpoint, and even before Christchurch. He is vulnerable and volatile at his worst, but as a viewer, your empathy can only strengthen as he threatens to unravel all the work he has clearly done to clean up his own act in the wake of his mentor Clement’s demise in season one. The loss of this father figure sees him searching the past for another.

Elsewhere, Gus’ employment with his local MP is formalised. How this means anything to anyone else at this point is anyone’s guess. He is banging Jesse Bloom’s son though, so perhaps that has it’s repercussions and perhaps they lead back to Harper.

If this were an episode of Game of Thrones, tonally, you would expect the next episode to feature the battle of Blackwater. Not nearly enough Eric, and no Jesse at all – the show excels when it is a solid blend of youth and experience colliding. Though developmental and sharp, this is the first episode, however, that has verged slightly on Gen Z melodrama.