Harper finds herself stuck between a rock and a hard place in this weeks Industry as she accompanies the Rican Healthcare investors on a recreational shooting trip to Wales. It’s not difficult to figure out that she is the only person from the CPS desk who is there, as its all senior managers and investors, so who invited her? After securing Jesse Bloom (Jay Duplass) as a significant shareholder in Rican Healthcare last week, Harper has become his right hand woman at this event. His ear to the ground and his confidant. As an insider at Pierpoint he knows that she can find out all the juicy little secrets around this deal. 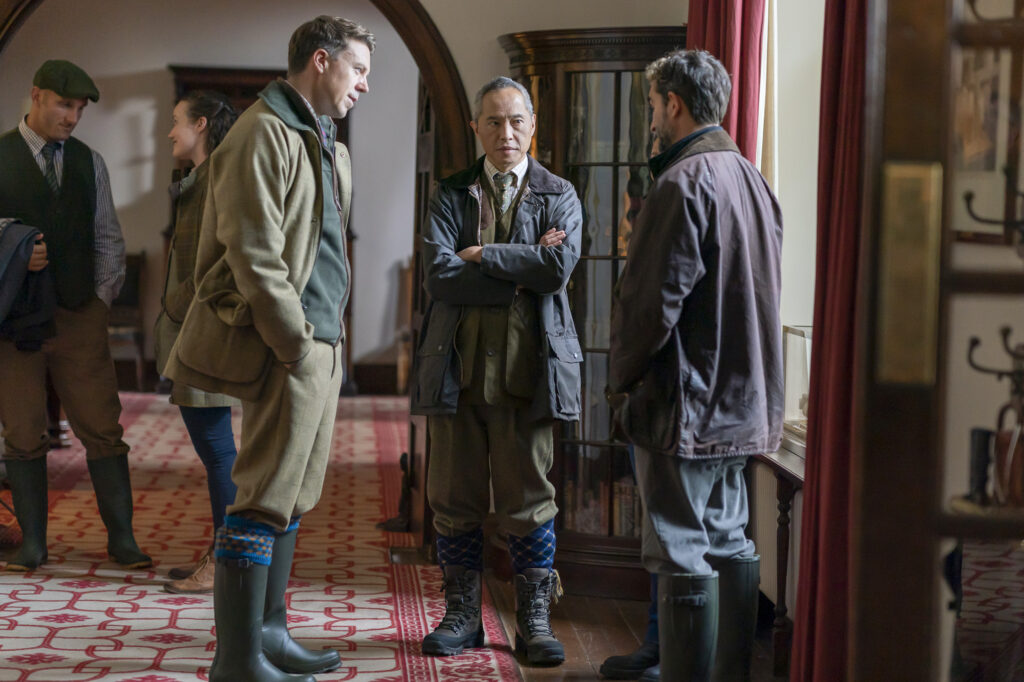 In an episode which feels like a game of chess, we see Harper quietly and patiently observing all the moving pieces, asking questions when she feels she needs to and figuring out what is at stake and what is at play. In doing so, she undermines Eric once more, in a power play that sees Jesse take a majority share in the company. But lets go back a bit first. The three names are Jesse Bloom, Felim and Anna Dearing, the latter we know who is particularly frosty with anyone from Pierpoint she doesn’t know, luckily after Harper pays for her coffee on the train she is much more willing to see Harper as an ally. Felim and Eric are hatching a plan to buy back all of Jesse’s shares and then sell them at a profit once it comes out that the investment initially isn’t going to be particularly profitable, in fact will likely run at a loss. Meanwhile, Harper and Jesse are in cahoots in late night bedroom meetings. He asks for her advice when she tells him of their plan but she quite honestly admits she doesn’t know enough about what is going on to give him any advice, something that displeases him. However after a bit more talking to various names, she learns more and more and suggests to him that he actually invests even more, to become a majority shareholder. Going off a hunch and her understanding of how investments work at the moment, she suggests that yes, initially he will be at a loss, but eventually he will be a majority shareholder in a booming industry which will be highly profitable. He trusts her and takes the deal. In true Industry fashion, the episode ends again at the CPS desk, with Harper leaving Wales early to get in before the market opens to secure Jesse’s deal, leaving Eric, open-mouthed at the breakfast table, learning of her move.

Harper is growing up and out from under Eric’s wing. As her mentor he not only gives her a good dressing down once in a while, but he lifts her up and gives her new opportunity but Eric is not afraid to make sure Harper knows she works for him, not with him. Harper, seeing an opportunity with Jesse to build a strong professional relationship with a brand new, extremely rich and successful client, chooses to go against the man who calls her ‘harpsichord’ and instead sides with the man who seeks her out in the night to ask for her advice on serious financial matters. She’s not a graduate anymore, she’s a peer and she wants to be treated as such. She has more than proven herself that she is ruthlessly good at her job, but she has a lot of other issues underneath all of that. Harper has this way about her that whenever she is alone with a man, you think she is going to try and have sex with them. She is a very sexual person and the way she looks at a man tells you that she really does only have one thing on her mind. After a failed attempt at seducing Robert 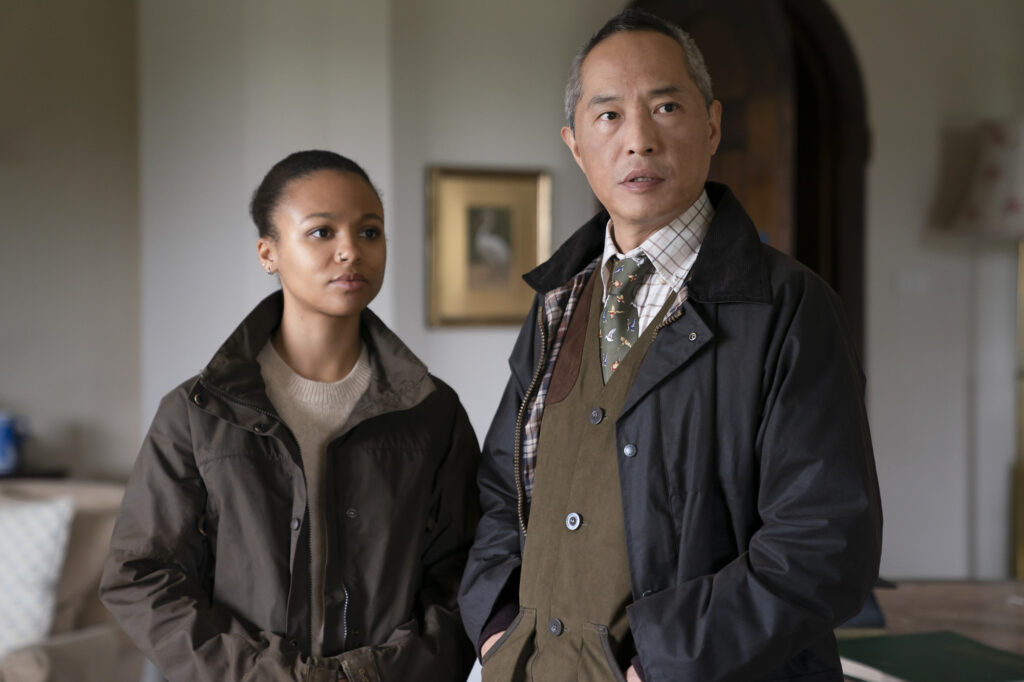 when she was drunk, she tries again in their bathroom but this time he is complicit and they start to go at it on the bathroom sink. But poor Robert still can’t get it up, so Harper lays on the bathroom floor and masterbates in front of him. This can’t be excused by drugs or alcohol and instead can only be put down to someone who showboats her sexuality. She wants to be seen as sexual, its something she can control, so even when Jesse comes to her room at night and she is naked on her bed, she wraps herself up in her dressing gown but we know full well that she is naked under there and it wouldn’t be unlike Harper to just drop the dressing gown and jump on Jesse. However, she is smarter than that and hasn’t quite got Jesse where she wants him yet and Jesse may not even let her get him there. However, a somewhat sexual encounter between them feels inevitable, knowing what know about Harper.

Yasmin, like Harper, has grown up and out from the FX desk and wants to get into Private Wealth Management after meeting the very ambiguous Celeste at Maxim’s party.  Yasmin arranges a meeting with Celeste, herself and her father as they pitch themselves to manage his wealth, however what they expected to be a profitable business meeting just turns into Yasmin’s father belittling them both as ‘lovely ladies’ and beaming over his little daughter doing so brilliantly. Isn’t she wonderful, Celeste? Wanting to be taken seriously be Celeste and not seen as someone’s ‘little girl’ she explosively tells her father that she wants him out of her life for good. She then takes it upon herself to meet with one of Celeste client’s alone after she tells him he has stopped talking to her. Sensing that she can do something good here, she goes to dinner with him and takes the new and improved Kenny along with her as an expert on Crypto-currency, something her client is interested in. Unbeknownst to her, Kenny and Rocco are both recovering alcoholics and they hit it off. Yasmin sees an opportunity for him to become a client of both Private Wealth management and FX and skips off to Celeste to tell her what she has done, but Celeste is less than pleased that she now has to share her client with FX. Yasmin, needing to get a win back in with Celeste leaves her father a pleading voice note, playing the part of ‘daughter trying to make daddy proud’ in an effort to win him back, thus placing her back in Celeste’s favour. 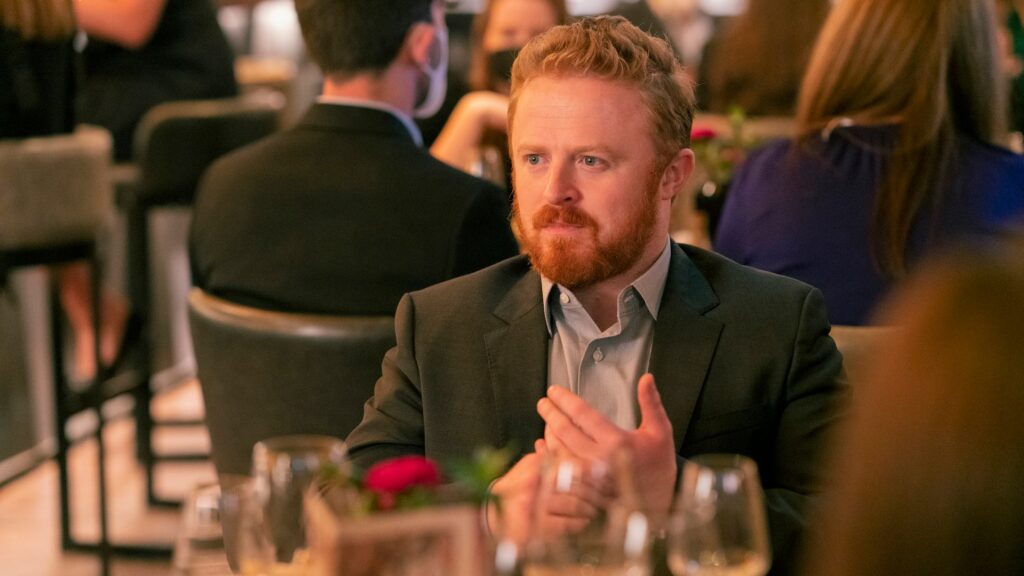 Everyone at Pierpoint is an enemy, until they have proven that they are not. Yasmin’s naivety gets the better of her sometimes and while she is an incredibly intelligent and capable professional, she needs to learn the rules of the game if she wants to get a win.