The best show that no one is talking about is back! Having fallen bafflingly under the radar back in 2020, even at a time when people were doing nothing apart from watching television, Industry returned to HBO last week with an explosive opener to it’s second season. Thrust into mid to late-Covid era return-to-the-workplace, the graduates are now well established on their respective trading desks, with some even being forced to nurture their own newbies. Yasmin is ever ambitious regardless of the tact, while Harper continues to take risks that you cannot help but think will be wearing increasingly thin on Eric’s precipitous ego. And Robert, well, he doesn’t really seem to know what his purpose is, but that’s part of his charm. At the core of this week’s episode is a giant block trade to which one of Eric’s most esteemed clients is intended to anchor. But, Harper being Harper, presumably fuelled by residual after effects of last night’s powdered confidence, decides to fish bigger in the form of Jesse Bloom (an increasingly appealing Jay Duplass – new to this season’s cast), perhaps on the assumption that Eric would be able to manager Felim himself, given their history. As it will turn out, Felim prefers Eric when he is half of a partnership, and as a result of Harper’s no show, gets cold feet on the deal. As this arc circles back at the end of the episode, it creates a Sorkin-esque degree of quick-fire tension rarely seen in a show so low key. It is Emmy-level stuff both technically and on the page, and yet it will go largely unseen an unappreciated (watch this show!)

Across the floor, Yasmin continues to fuck her way from day to day, continuing to dabble in Private Wealth Management via Celeste, who this week upgrades her from a casual, if charged, chat on the eleventh floor, to a client dinner at which she is baptised in cringy fire. There seems to be a fine line to toe between PWM and escort services, and this is lesson that Yasmin seems to be learning quickly. The basic difference being that instead of sex, it’s being relatively good with money, but really, what’s the difference? And, in perhaps the most unsubtle of terms, the evening concludes with Celeste affirming fairy godmother status in the form of a literal pair of magic slippers. 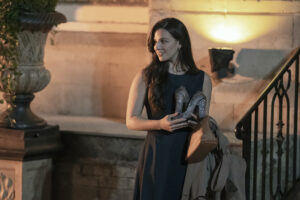 Meanwhile, and though a third prong currently, Robert is up to some attempted Private Wealth Management of his own as he continues to work on bringing Nicole’s money back to Pierpoint. Questioning his own ability to really contribute, he has decided to assign himself the steepest of challenges which, ultimately at this point, hasn’t even resulted in a bankable trade as much as he has been lead to a toy boy status that is void of his skillset, unless his skillset is getting handjobs. There is definitely more to come from Robert this season, but what it is, for now, is a mile off. The focus for now continues to be Harper and Yasmin, how they continue their respective rises, and whether or not there is reconciliation to come. Where there has been understandable vitriol, the episode climaxes with Harper salvaging an anchor for the block trade that seemed all but dead on arrival – the manner of which is crafted to exquisite dramatic precision by director Birgitte Stærmose. This is not without the crucial input of Yasmin, who lets her guard down with Harper long enough to get the deal over the line for the greater good.

It is utterly sensation television that should, in no universe, be passed over.