The season two hour-long opener reminds us exactly why watching a bunch of young, aspiring investment bankers in London is such an entertaining premise. The quick opening montage shows us the stark contrast between how Harper (Myha’la Herrold), Yas (Marisa Abela) and Robert (Harry Lawty) are living their lives in a post-COVID world. Harper is living in a pretty nice-looking hotel, although very non-descript and corporate, she spends her days doing laps of the pool, drinking beers and making work calls from her hotel room. Whereas Yas is literally living a life of sex, drugs and rock n roll as she parties all night, and works all day. Robert however, after his downfall in season 1, is taking this much easier and is struggling to find his place on the CPS desk once more. Harper’s absence from the office is not ignored by her co-workers who feel like her decision to continue working remotely is unfair to everyone else who is coming into the office. Eric (Ken Leung) makes it clear to her that in order to stay relevant she needs to be face at the desk, so she reluctantly comes back to a very hostile work environment. 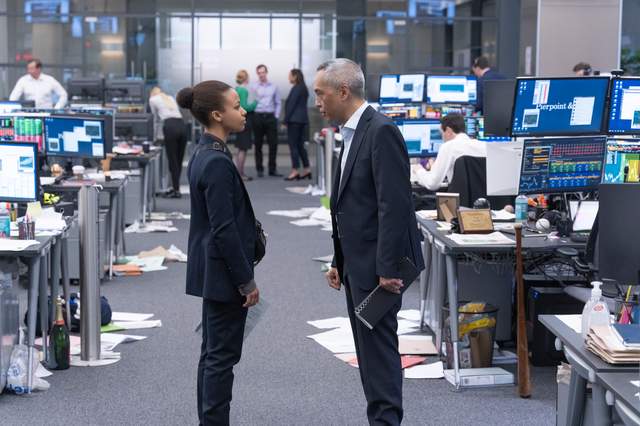 The series is set up brilliantly by the threat of the CPS desk being absorbed by the New York office, as it is seeming to be less relevant in a post-Brexit world. The New York office sends one of their employees over to sit on the CPS desk in between Eric and Harper, almost as a ‘spy’ to see what Eric is up to. This threat is very, very real and Harper and Robert are told to protect themselves by securing their own clients. Robert, who hasn’t made a single phone call since his return to work, is struggling to find his motivation as a clean living investment banker whose job is under threat and who is living in a scary post-Covid world. Harper just wants everyone to be nice to her again, but after a frosty reception from Yas in the ladies’ bathroom, she receives a much more explicit reception from Rishi who is less than pleased to see her back and considers her to be worthless to him. She has a lot of work to do to regain their friendship, what better way to do that than by befriending the hottest topic in financial matters, the man who made billions during the COVID crisis, who just so happens to be her drinking buddy at the hotel she lives in.

Robert being Robert, invites Harper to Rishi’s engagement drinks which she sees as an opportunity to win everyone over again. She gets herself dressed up and ready for a night of mingling, but winds up drinking alone. She really isn’t anyone’s favourite person, not just for hiding in a hotel while everyone was in the office, but also for throwing Daria under the bus at the end of season 1, in order to save her mentor, Eric from losing his job. The only person still on her side is the newly reformed Robert, who accompanies her back to her hotel because she is so drunk she can barely stand. What would have normally ended in some ill-advised drunken sex, Robert pushes Harper away while she berates him for not being enough of a man for her. Despite this, he leaves her a note suggesting she leaves the hotel and moves into his spare room. That could be fun?

Yas on the other hand has very clearly outgrown her position on the desk. She attends a party hosted by her biggest client and family friend, Maxim, who declares that he is finished and Yas has lost her biggest client. What better way to send it off than by coke-fuelled aggressive sex? She also finds a new friend in Celeste, who she wrongly assumes is a sex worker but is actually a superior at Pierpoint. Despite her error, the two enjoy each other all night, flirtatiously dancing, snorting cocaine, and talking well into the night. When she finally reveals that she actually isn’t a sex worker she offers Yas her card as a lifeline off the desk and into higher-up things; something that may well come in handy for Yas, who without making a big change is likely to suffer some dire consequences.

The season is off to an excellent start with three bright young things coming up against some brand new dramas and who despite being at the very beginning of their careers, are facing some potentially devastating prospects.

Industry continues on Mondays on HBO at 9pm

Watch the trailer for episode 2, The Giant Squid, below!