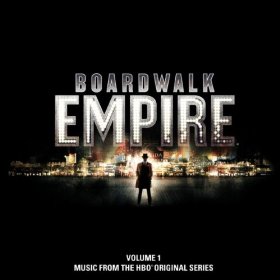 HBO has just released the soundtrack for the first season of Boardwalk Empire.   Featuring tracks from Regina Spektor, Kathy Brier, Stephen DeRosa, Catherine Russell and many more; if you liked the music from the show you’ll love this soundtrack.    Grab[amazon_link id=”B005DKGNEO” target=”_blank” container=”” container_class=”” ] a copy from Amazon[/amazon_link] right now, burn a CD and transport yourself back to the 20’s… just try to avoid Atlantic City, things look to be getting a bit dangerous with Nucky slowly losing control of his city this season.

I’m currently listening to it right now and I can tell you it’s well worth the $8.99 price tag.   For $12.99 you’re given a few bonus tracks on iTunes but I’ve yet to listen through that far so I can’t tell you whether or not they’re worth the $3…  I’m guessing they are!   With lines like “The dumber they come the better I like ’em… cause the dumb ones know how to make love” you’ll find yourself smiling along with these 20’s tunes.  The humor and wit of that time period shine through the music and really work to complete the illusion.   Check out the interview with Vince Giordano about his work on the album.  Boardwalk Empire season 2 premieres Sunday, September 25th at 9PM on HBO.